Published by Down Beach Author on November 3, 2021 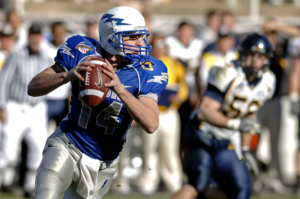 Stephen Troese Jr. is the Founder and CEO of LRI Energy Solutions. An avid college football fan, a former player himself, and now one who’s involved with training aspiring players, Mr. Troese blogs about applied kinesiology, innovations in workout equipment, and training methodology. Stephen Troese Jr. provides some insights below about the importance of both the weight room and the field for college athletes.

College football is more than a rite of passage into the big leagues, and, outside the United States, one can be forgiven for thinking that college football is a minor version of the NFL or a lesser entity. But for the colleges, the athletes, and even the crowd, college football is the glue that binds everything together. From the students who cheered on Rutgers and Princeton at the inaugural college football game in 1869 to the present day, where it has become the defining sport that paves the way for future athletes, college-level football is where it all begins.

Stephen Troese Jr. relates that an individual looking to get into the world of college football must become aware of the training methods that build the foundation that turns high school athletes into powerhouses that will eventually go on to dominate the sport. College football workouts are taxing, both mentally and physically. But the goal is, like in the army, to build you up after being stripped down. The game requires a strong mind and body and training that demands a lot of even the most seasoned of professionals. What does it take?

For an athlete to become the entire package, Stephen Troese Jr. says they must break down before they build back up. College football training breaks down into three different areas: strength and power, speed and agility, and endurance.

Strength and power focus on compound lifts, such as bench presses, squats, and power cleans. The goal is to stabilize and add strength so the players can have dynamic movements on and off the field.

Speed and agility are natural bedfellows in football. Football, by its very nature, is stop-and-go, and speed and agility drills are crafted around short bursts of energy at 100% effort. These comprise sprints, cone drills, and other key exercises, such as burpees and snakes. The drills, while intense, can even fill a seasoned football player with dread. But they are important to provide speed and agility in significant ways.

The Breakdown of a College Football Workout

The warm-up component is greatly neglected outside of college football, but any workout, on or off the field, should start with a dynamic warm-up, according to Stephen Troese Jr. Dynamic stretching is the key component of preparing any athlete as the muscles and the joints go through the full range of motion.

The next aspect of the training regime could focus on several variables. For example, some coaches like to structure workouts where they do splits, such as an upper-body one day, lower body the next, but others may focus on having a push day followed by a pull day. Push day consists of “pushing” the weight away from your body using exercises like squats or bench presses and “pulling” it towards you the next day, which would include exercises like rows and deadlifts.

What Is the Periodization of Workouts?

The game of football involves a dynamic approach to rehearsing strict approaches, and therefore, training for the sport will involve many “plays.” However, it is away from the field when athletes build up their strength and approach to the game. The periodization is broken down into three different phases:

This is where athletes will focus on building power by lifting high weights at low rep counts. Stephen Troese Jr. says the loading phase often occurs between the first 6 and 8 weeks of training.

The next phase involves the athletes increasing their rep targets. The first six weeks involve aiming for between 4 and 6 reps with each set. During this phase, it increases to between 6 and 10 reps per set, while the rest period decreases from 90 seconds to 60 seconds between each set. The decreased rest aims to develop muscular endurance, so the athlete keeps their strength during a game.

On the approach to the college football season, the focus shifts away from isolation “splits” and towards full-body workouts. The rest period is decreased through reciprocal inhibition, which is the practice of working opposing muscle groups on alternating sets. The aim at this stage is to increase cardiovascular endurance so the players are in “football shape.” 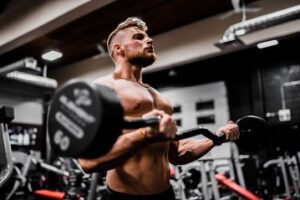 Other Factors to Consider

There are, of course, many other areas beyond how an athlete structures their training. Mobility drills are integral to a college athlete’s ability on and off the field, but this is one of many different pillars, including rest and recovery, and nutrition. The body doesn’t take days off, and as the body goes through metabolic processes that will make or break the athlete it is vital to prioritize the fundamentals of recovery, which include adequate sleep, hydration, self-myofascial release, and heat/ice/compression, all of which are key to delaying DOMS (Delayed Onset Muscle Soreness) and speeding up physical and nervous system recovery.

Football is one of the most demanding sports, not just physically, but mentally. Stephen Troese Jr. advises that athletes who are embarking upon a college football career do not just need to address their physical fitness but should be aware there are many approaches to being ready for the sport.