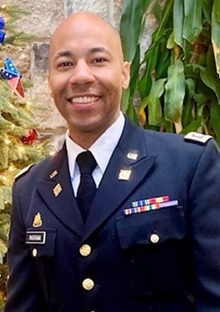 “This is an absolute dream job for me,” Atlantic Cape alumnus Jerome Ingram Jr. of Galloway Township said. “Being a voice and a positive role model and helping military members, veterans and their families – it’s just so rewarding.”

Ingram, who is a captain in the New Jersey Army National Guard, was recently hired to fill the newly created position in the Center for Student Success.

“We are proud to provide educational opportunities and additional support to students who have served our country or those who are currently serving in the military and their family members. Our service members and veterans have given so much to our country, and we are honored they chose Atlantic Cape to continue their education,” Atlantic Cape President Barbara Gaba said. “We are always looking for ways to better support our students to achieve their goals, and I thank Jerome for his efforts.”

Ingram officially stepped into the position this summer, helping veterans and athletes prepare for the fall semester by registering for classes and making sure their schedules are accommodated, working around practices and games or drill weekends and military orders. He also helps students understand and navigate education benefits extended to service members, veterans and their dependents.

“They definitely need a voice and it helps that I’m someone who walks the walk. I know what they’re going through,” he said. “I’m in the National Guard myself, so working around Temporary Duty Assignments, drill schedules and deployments is something I’m very familiar with and I can help them coordinate all of that with their professors if they have orders that come up.”

Ingram sees himself in the service members and veterans he works with at Atlantic Cape. He enlisted in the Army National Guard after graduating from Atlantic Cape in 2005. A logistics staff officer responsible for equipment and maintenance readiness of nearly 500 soldiers in his battalion in Vineland, Ingram just celebrated his 16th year in the military. He was recently selected for a promotion to major.

“The military has given me so much – structure, discipline, different life skills and experiences that I would’ve never had otherwise,” Ingram said. “Going to college first really helped me. When I enlisted, I joined as a private first class, which is like the third level of private, as opposed to joining at the lowest level – giving me a little more money and a little more rank. It also allowed me to become an officer – you need a degree to even have the opportunity to go to Officer Candidate School.”

These are experiences Ingram shares with the students he works with at Atlantic Cape and even those he doesn’t. There have been several instances where students have come to speak with him about joining the military after seeing the pictures and plaques in his office.

“I’m always happy to talk about the path I took and where it led, which is amazing. If they really are interested, I offer to connect them with a recruiter and that’s happened a few times, actually. They see me and the success I’ve had and it’s a great feeling to know it’s something they want for themselves,” he said.

He is currently pursuing a master’s degree from Thomas Edison State University, where he was recently named as the student trustee.

“I’m excited to be that person at Atlantic Cape who is here for our service members and veterans because I know what they’re going through,” Ingram said. “I am just so excited to see them all set out on a path that has been so rewarding for me. I want to show them that education really is the key to success.”