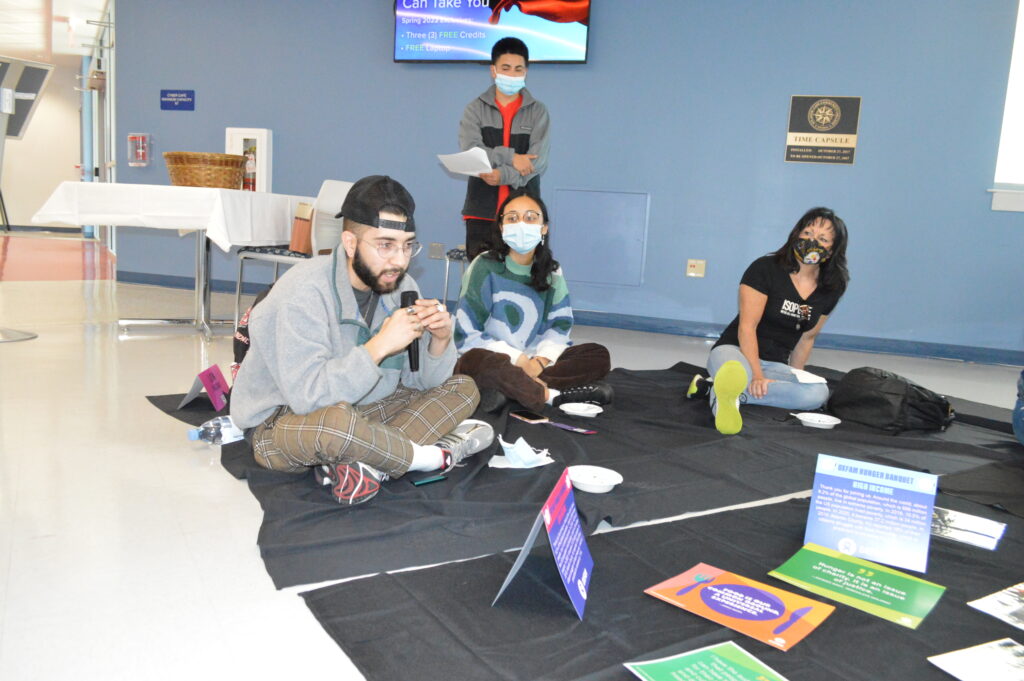 The poorest participants sat on the floor and ate a plate of beans.

MAYS LANDING — A group of students, staff and faculty at Atlantic Cape Community College gathered Nov. 18 for a Thanksgiving meal with a focus on poverty and world hunger.

During the Hunger Banquet, created by the nonprofit organization Oxfam and hosted by the Student Government Association, participants were randomly assigned to experience a meal as high income, middle income or below poverty. 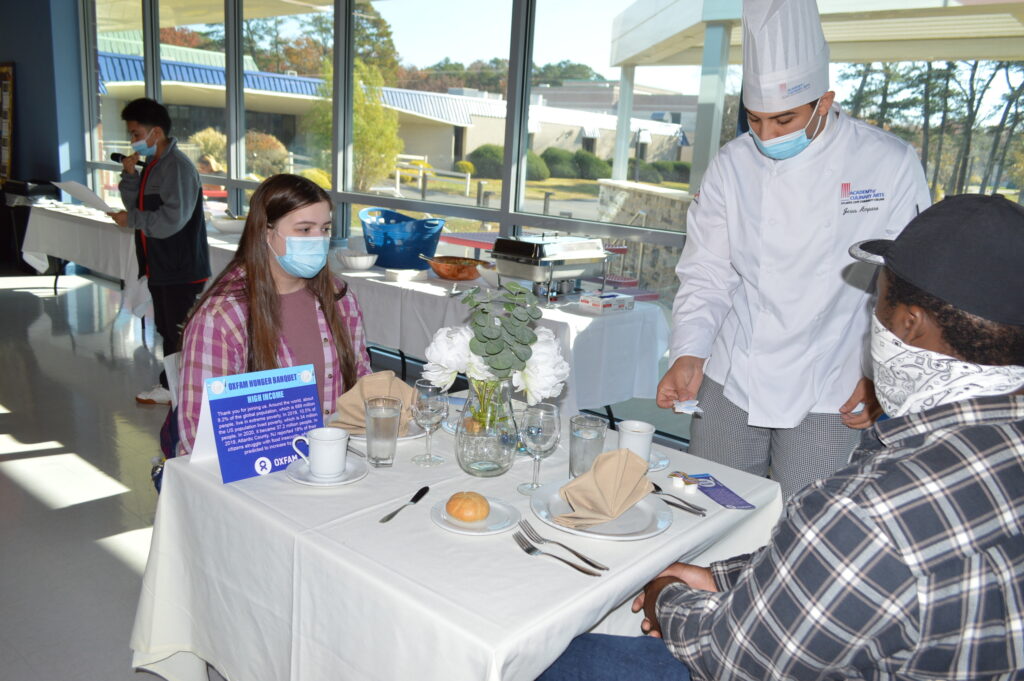 The wealthies participants were served a bountiful meal preapared and served by students in the Academy of Culinary Arts.

The “high income” participants sat at a neatly set table with glassware and cloth napkins. They were served by Academy of Culinary Arts student Jesus Amparo, enjoying salad as a starter and a baked pasta entrée. 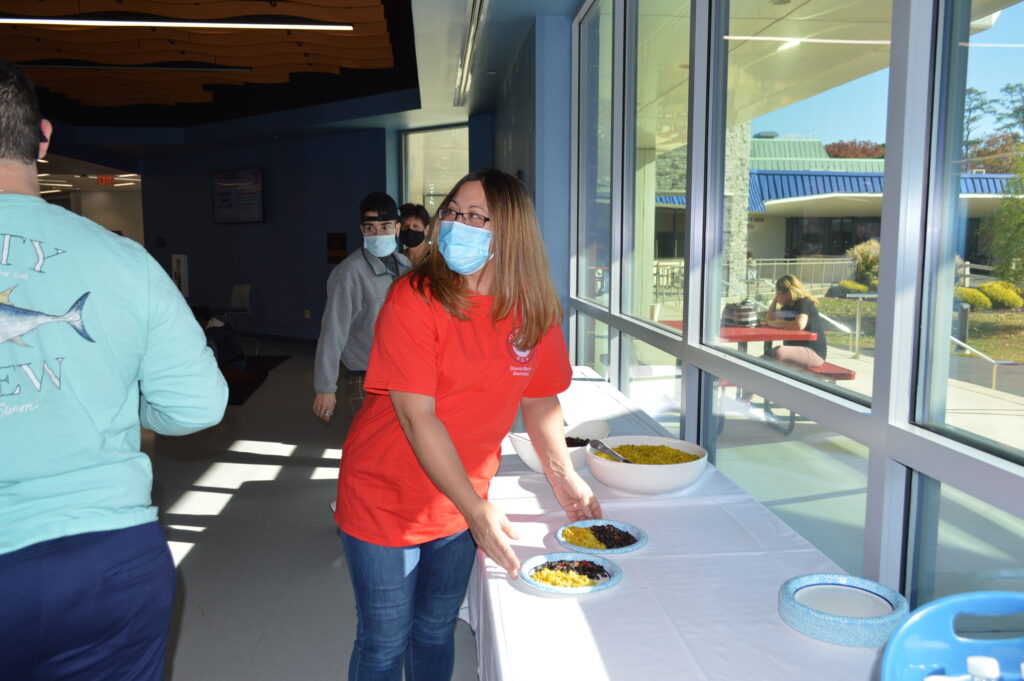 Middle income participants were able to eat a plate of rice and beans at a table.

The “middle income” participants were seated at a single, long table with no place settings. They could retrieve their meals second – men before women – and were served a dish of rice and beans in paper plates. 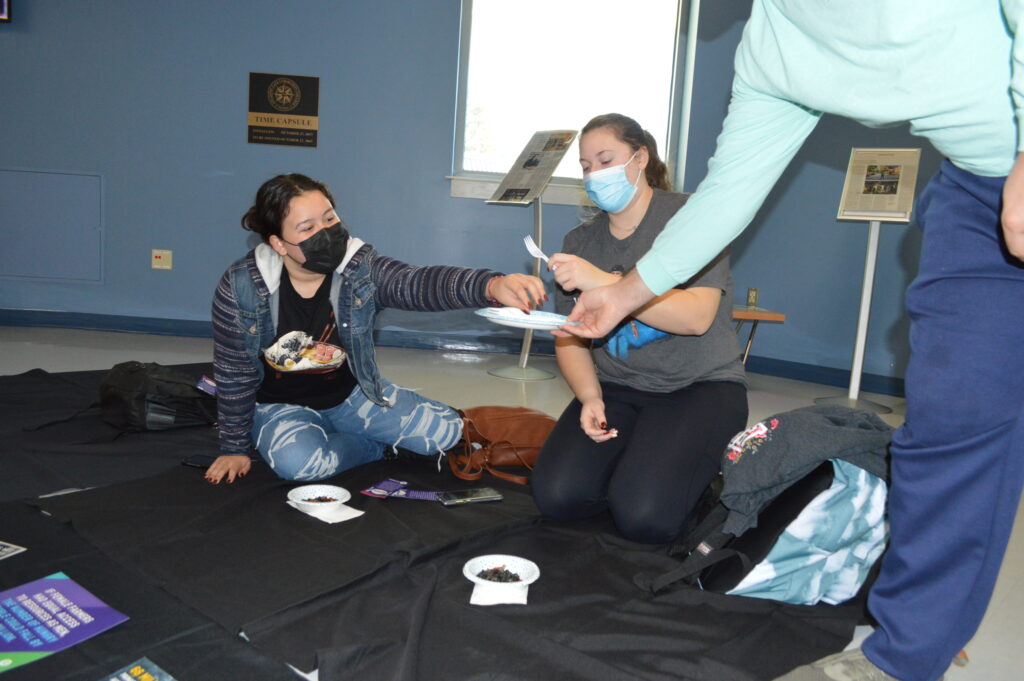 Finally, the “poor” participants could pick up a small bowl of beans, which they ate seated on a blanket on the ground.

The meal was followed by a group discussion on poverty and world hunger.

SGA President Caesar Sanchez noted that those in the “high income” tables represented the 20% of the world’s population with the highest per capita income, earning a minimum of just $7,300 a year.

“Can you imagine—earning less than $8,000 a year gets you into this group?” Sanchez said.

“This event is a metaphor for how food and other resources are inequitably distributed in the world,” Sanchez said. “The one thing to remember is this: Everyone on earth has the same basic needs; it is only our circumstances – where we live and the culture into which we are born – that differ.”

Student Alexis Cabrera, who was part of the “high income” group, said that she was surprised about the proportion of the different economic classes.

“I feel very fortunate to be seated at this table,” added student Ethan Kresch of Egg Harbor Township, also part of the “high income” group. “It’s a bittersweet feeling.”

Anaira Roman, a student from Hammonton, said that being part of the “low income” group really opened her eyes to what it means to live in poverty.

“It makes you feel a lot more appreciative of where you are in the world,” Roman said.

“Sitting here (on the floor), looking up at the table, it’s just like, ‘Wow,’ It’s how they see the world,” added student Emily DiStefano. “It doesn’t have to be like that and we should change it.”

Student David Pacheco Ruiz of Atlantic City pointed to a sign on the floor where he was seated that said 18% of Atlantic County residents struggle with food insecurity.

“Seeing something like this makes it a lot more tangible and it really hits home,” said Pacheco Ruiz, who participated in the “low income” group.

Nancy Porfido, Diversity, Equity and Inclusion Advocate and Judicial Officer for Student Affairs at the college, said that hunger, while a worldwide issue, also hits close to home, affecting families and students here at Atlantic Cape.

“That’s why Atlantic Cape, in 2019, established food pantries at each of our campuses,” she said, encouraging anyone who needs them to use them, and those who can to donate.

For more information on The Hunger Banquet and world hunger crisis, visit oxfamamerica.org.