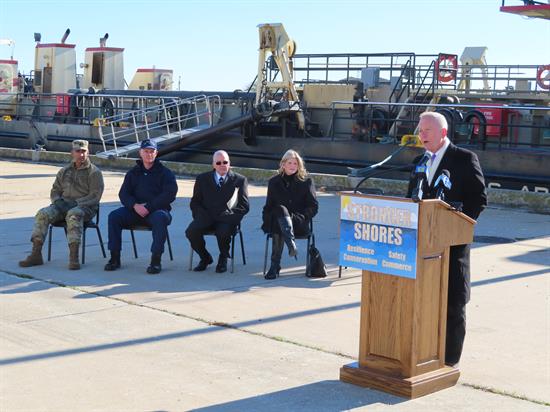 “It is now time to focus on the backlog of dredging projects in our back bays and channels that are imperative to the strengthening of our coastal communities and encouraging economic growth,” Van Drew said in a release. “Phase 1 of this major initiative will consist of dredging waterways from Cape May through Atlantic City, and Phase 2 will be dredging waterways in Ocean County, he said.

The Biden administration has already provided $4.1 million to dredge the mouth of the Maurice River, which Van Drew said is critical to the economic revitalization of the South Jersey Bayshore area that has been neglected for years.

“It is essential that we focus our efforts on maintaining the integrity of our shores, so businesses have the security and flexibility to expand, the ability to hire workers, and provide goods and services to our coastal communities,” he said.

On Absecon Island, Margate City is in the process of obtaining NJ DEP approvals to dredge the backbay area, called Beach Thoroughfare, which has become clogged with sand and silt that makes it difficult for boaters to maneuver during mid- to low-tides.

Margate is asking the state for a citywide dredging permit that will not only benefit the city’s marine industry but will also benefit bayfront property owners who also wish to dredge their lagoons without having to obtain individual permits.

The city is also seeking NJ DEP and NJ Dept. of Transportation approvals to use the abandoned 80-foot-deep dredge hole at Shelter Island to dispose of dredging materials. A portion of Shelter Island, which is jointly owned with Ventnor City, was dredged in the early 1900s to build up the Ventnor Heights area for housing development.

According to Margate City engineer Ed Dennis Jr., the city attended a pre-application meeting Nov. 10 with the DEP and Army Corps to prepare for completion of the city’s application.

“That is a milestone in this process that will ultimately lead to our application submission,” he said.

Using Shelter Island as a disposal site would save thousands of taxpayer dollars on the cost of transporting and disposing of dredge materials.

“We also must ensure that our Coast Guard is well-equipped and able to execute their mission, whether it is patrolling our back bays, carrying out search and rescue missions, or marking our channels to prevent boating accidents,” Van Drew added. “South Jersey is home to our nation’s only U.S. Coast Guard Training Center, which is why we tirelessly fought to secure $50 million for new barracks. Cape May must continue to be a leader in training our Coast Guard, and our campaign will ensure they receive the funding and resources necessary to be prepared for anything.”

Most of the funding for the Stronger Shores project would come from the bipartisan infrastructure bill signed by President Joe Biden last week. Van Drew, (R-2nd) voted in favor of the bill.