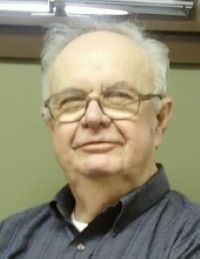 MARGATE – I always get startled when I walk into Historic City Hall for commission meetings. In the interior window of the Historical Society Museum located in the historic building is a life-sized cardboard cutout of Frank Tiemann, one of the originators of the historical society.

After recently writing a story about investigators discovering possible paranormal activity within the museum, it is now likely that whatever ghosts are hanging around will have the company of a man who kept the past alive for future generations to know and love.

I only met him on a few occasions but found him to be charming and totally committed to preserving the history of Margate City.

My former colleague Susanne Marino, who covered Margate news back in the day, said when the city celebrated its centennial, Frank was instrumental in helping to collect and document the city’s great homes, Barbary Coast and the police, fire and lifeguards of the past, along with the storms the city weathered over the years.

“He was a funny, bright, dedicated family man and a treasure trove of all things Margate,” Marino said. “He was always riding around the city on his bicycle, and I found him to be funny with a heavy dose of sarcasm.”

Margate Mayor Michael Becker called him “a unique man” who was a good personal friend and a friend to Margate.

“He was totally dedicated to the history of Margate and although we didn’t always agree on things, he was always respectful, persistent and hard working. He will always be part of Margate.”

According to Richard Helfant, executive director of the Save Lucy Committee that maintains Margate’s most famous tourist attraction, “Margate lost another legend,” and he hopes someone will be able to follow in his footsteps.

“I knew him since I was a little kid and he was a police officer with Pat Patterson,” he said. “He’s the reason the Historical Society exists. He was a great guy, and he had some input on saving Lucy the Elephant and preserving her history. He was a vital part of Margate.”

Margate City Library Director Jim Cahill said Tiemann lobbied hard to get the museum in its present home and after his comrade in history Pat Patterson passed away, Tiemann picked up the mantle to ensure the Historical Society’s collections were preserved.

“He was our go-to person for any research on Old Margate,” Cahill said. “When the library took over the staffing of the Historical Society Museum, he stopped by every day for coffee. He was a great guy and a very serious collector of all kinds of things. He was always taking pictures of the changes in the city’s architecture and documenting its history.”

Becker said Tiemann would often go to the Tax Assessor’s Office to get a list of properties that were going to be demolished. He did that because he wanted future generations to know how Margate originated.”

Recently retired museum curator Gwen Meade said many adult men visited the museum over the years to express gratitude for Officer Tiemann who took them home to their parents instead of to jail when he caught them underage and inebriated.

“Frank would laugh and say he didn’t want to do the paperwork, but he really didn’t want to stain their reputations at such a young age,” Meade said. “He cared, truly and deeply.”

Before Tiemann entered a nursing home, the Historical Society presented a program called, “Being Frank,” which was all about his life and contributions to the city.

“I hope we can track down the video recording we made to share with his family,” Cahill said.

Here is his obituary:

Born September 9, 1936, he lived in Margate City his entire life. He attended Granville Avenue school and graduated from Atlantic City High School in 1956 and worked as a police officer with the Margate City Police Department until retiring in 1993. He was a veteran of the Lebanon Conflict while serving with the Marine Corp, and also served in the Army. Frank was a founding member and President of the Margate City Historical Society and the Atlantic County Veteran’s Museum Committee.

A viewing will be held on Friday, June 24th, from 10-11am, followed by Mass at 11am, at Holy Trinity Parish: Blessed Sacrament Church, Margate. Burial will be private at Atlantic County Veterans Cemetery, Estell Manor.