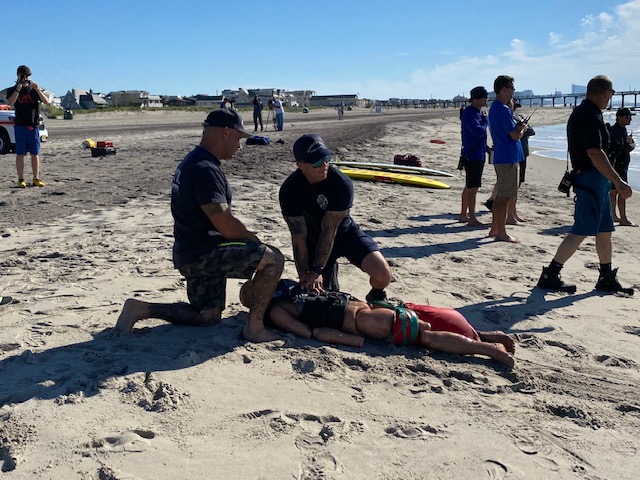 MARGATE – It took rescuers 71 minutes to locate the third victim. Unfortunately, he didn’t make it, but the first and second victims pulled from the ocean Wednesday morning were fine. In fact, one refused medical treatment.

That was the scenario that unfolded near Huntington Avenue in a simulated after-hours water rescue that involved Margate, Ventnor and Longport Beach Patrols and public safety units, the NJ State Marine Police and the U.S. Coast Guard. The field training exercise, headed by Ventnor Fire Chief Michael Cahill and Margate Fire Chief Dan Adams, started when a 911 call was placed to Margate City Police Dispatch saying there were people being pulled out in the ocean.

Cahill said the field training exercise was designed to test the operational capabilities of Downbeach rescuers. The scene was a several blocks long stretch of ocean between the Margate Pier and an outfall pipe.

“This is a multi-jurisdictional exercise to test communications of the city, state and federal levels,” Cahill said before the 911 call was dispatched to the Margate City Fire Department, which would be the first to respond to such an emergency. “This is the first time we’ve ever done this to judge our standard operating procedures and it will allow us to follow up to make improvements where we need to.”

“This is a joint effort of the three Downbeach communities,” Adams said. “The planning for this got started as a result of the death of a swimmer in Ventnor a year or so ago. We are training together, so if we have a real-life experience, hopefully we will have a better outcome.”

Margate lifeguard Ava Ritzel played the role of a bystander who called 911. She said she was instructed by Police Dispatch to stay on the scene so that police would know where to go when they arrived. A police ATV quickly responded to keep an eye out for where the swimmers were last seen and to secure the scene.

Meanwhile, Margate Beach Patrol Capt. Chuck LaBarre rowed out on a surfboat to locate a swimmer in distress, played by Brad Cress, 23, an eight-year guard. The swimmer was okay and was told to wait on the beach until more help arrived. That’s when first responders learned there were others swimming in the water after normal lifeguard hours. He left an orange “can” or buoy in the water, so other rescuers would know where the victims were last seen.

Playing the role perfectly, Cress, who was towed to the beach on the back of a wave runner, said he was ok, but his two buddies who had a few beers, were taken out by the waves and a strong rip current.

Lifeguards came from north and south on paddleboards, wave runners and surfboats. For every 10 minutes that passed, additional resources were deployed, including the Marine 3 rescue boat from the Longport Volunteer Fire Department. Additional minutes brought out the NJ State Marine Police and U.S. Coast Guard watchstanders.

Margo Flores and her daughter Maya, who live in Estell Manor, were walking on the beach waiting for a marine biology summer camp being held outside the Margate Public Library to begin, when they noticed all the commotion happening before them and learned it was just a simulation.

“This is great that they get to practice real life scenarios,” Margo Flores said. “When it comes down to having to save someone, you need to know what to do.”

A truckload of off-duty lifeguards who were notified to respond to the scene by a group text, arrived and were instructed to lock their arms together and walk across the shallow area were the waves were breaking.

“Don’t break the chain,” they were instructed. “They are your safety net to get back in.”

Cress said it was the first time he experienced an interagency training simulation.

“It’s my first time for this, but we do extensive training all the time and every weekend we do practice rescue drills,” he said. “It’s a dangerous job. The perception is that its glamourous, but it gets very real, very fast. We do rescues just about every day. In fact, just the other day, I had to row out about a mile to bring in someone on a paddleboard who got blown out by the wind.”

A second victim was found, but this time, it was a life-sized training dummy used for CPR training. Several lifeguards started CPR and the victim was revived, they said.

“Yeah, he was intoxicated,” one guard said.

“During duty hours, we hope we can make the rescue. The main problem is when rescues have to be made after hours,” he said.

The simulation took place starting at 8 a.m. and ended by 9:11 a.m. when there were very few people on the beach. If it were during beach hours, “we would have to move people out of the area so we can make space for emergency vehicles,” Funk said.

“Communication is the hardest element when all units have to work together on a rescue,” he said.

Throughout the simulation, the beach rake machine cleaning the beach never stopped its appointed rounds.

Margate Patrol Officer Jessica Fane, who was first on the scene, said police communicate on a different radio frequency, to free up the airwaves for other first responders.

Lt. Chris Graves of the Margate City Police Department and Beach Patrol demonstrated hand signals lifeguards use to communicate after they blow their whistles. Lifting arms to encircle the head signals the all-clear for lifeguards, he said. Arms crossed across the chest means there’s a serious problem and patting the top of their heads means to send help from other lifeguard stands.

About 60 minutes after the drill started the third victim (another dummy) was found floating face down about a quarter-mile out. He was secured to a sled and towed in by Margate City Firefighter Darren Hutchinson. Unfortunately, the dummy didn’t make it and the discovery signaled the end of the simulation.

There would have been a fourth victim, but the U.S. Coast Guard helicopter that responded was having a mechanical issue and the drill was cut short, Cahill said.

“That’s exactly the type of thing that can happen in a real life situation, and we have to be prepared for it,” he said.

At a “hotwash” or “tabletop” wrap session, Cahill commended everyone for following standard operating procedures, and asked them to notify their supervisor if they had issues or concerns during the drill.

“We need everyone’s input,” he said, noting that the drill was completed faster than expected.

“We’re all on the clock, but if something bad were to happen, the clock doesn’t stop.”

Adams told the group gathered under the OEM tent that during such events, public safety officials should “keep the resources coming until you make sure all the victims are accounted for.”

“Overall, it was a success,” Cahill said, “but we can always do something better.”

A member of the U.S. Coast Guard crew said it was helpful to actually meet the Downbeach first responders in person.

“Now when an event happens, we already know each other,” he said.

Both fire chiefs said they tested communication and learned a lot about how the teams worked together to achieve the desired result.

“Downbeach rescue teams have always had a great relationship and work together to achieve a good outcome,” Cahill said.

In a TV interview being filmed by a local news channel, Adams reiterated the rules of the beach.

“Only swim near a lifeguard at guarded beaches, don’t swim in the ocean after hours and put rescuers’ lives in danger,” he said. “It’s all about having a great summer and while you’re here, listen to the lifeguards.”