Ventnor gets funky for pickleball tournament 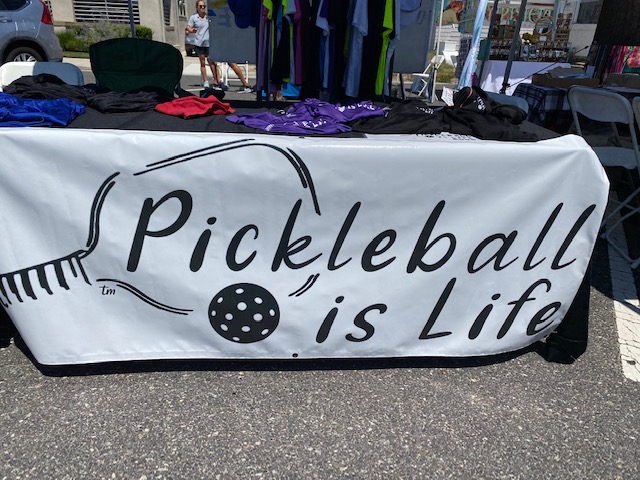 VENTNOR – There was more than the pocking of pickleballs going on at the Funky Pickle Ventnor Classic, held for the second year Saturday at the Suffolk Avenue recreation center.

Hundreds, if not thousands, of people crammed the pickleball and tennis courts, walkways and street, which was closed to traffic for an open air market featuring pickleball paraphernalia, pickles and of course, a chiropractor to work out the kinks after playing several rounds of the rapidly growing sport.

They say anyone can play pickleball but taking a look at the players on the court, it was evident that many of those who make it a point to play daily are true athletes, regardless of age. More than 200 people signed up to play in three tournament brackets catering to different skill levels.

One woman came to play in the tournament from Ocean City, where there are 11 pickleball courts and more coming.

“It’s more than they have here in Ventnor, but it’s still not enough,” she said.

According to organizers, Maggie Corrado and Alex Greer of Funky Pickle Productions, Inc., the event is a cross between a pickleball tournament and a block party, including food, music and vendors, along with ranked play throughout the all-day event.

Even the guy selling pickles, Ryan Harrison of Preservation Provisions, took to the court for a little exercise during a long, hot day of hawking provisions.

Among the vendors set up around the recreation complex was Dan Wach, who with partners Dean Trivente and Andrew Pessano, are engaged in a project to provide a new indoor venue for pickleballers at the former Burlington Coat Factory store at the old Shore Mall in Egg Harbor Township.

“We have a section of the store, about 22,000 square feet, where we will have eight indoor courts with a cafe,” he said. “They will be cushioned courts, so it’s easier on the joints.”

They plan to open the facility in late fall, he said, and the group was selling founding memberships for $799, providing pickleball players with an indoor venue and perks, including first dibs at playing when the weather is bad.

“This is our first venture, which we plan to grow,” Wach said. “Everyone wants a place to play and there’s nowhere to play in winter.”

Because pickleball is easy to learn and easy enough for players of all ages, the Proshot Pickleball courts will provide lessons using certified teachers, and offer perks to founding members.

“You can learn and get as competitive as you want,” he said. “There’s a game for everyone.”

Wach watched his wife play mixed doubles on the court next to his tent.

“I play. Someone asked me to play about four years ago and I got addicted. Now we play five or six days a week,” he said.