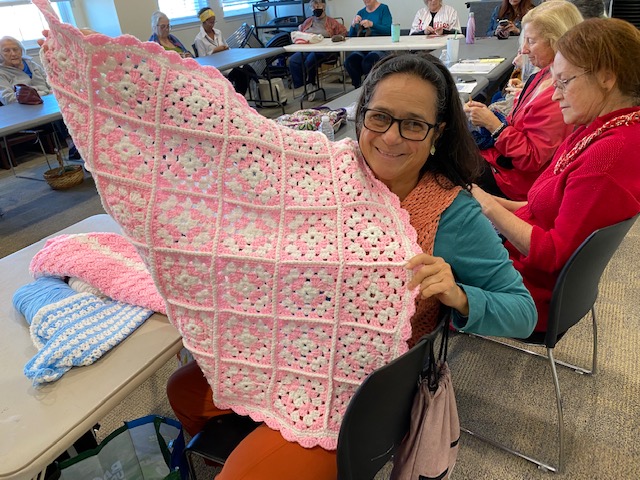 VENTNOR – The quiet clicking of knitting needles filled the meeting room on the second floor of the Ventnor Library Wednesday afternoon, as the Jersey Shore Knitting Guild held its third meeting after a two-year hiatus due to the COVID-19 pandemic.

“We used to meet monthly at the Senior Center, but we couldn’t meet there anymore,” President “by default” Leslie Elero said. “The library offered us this room and we love it. We contacted our longtime members who were interested in coming back and we have several new members here today.”

More than 20 of the guild’s 46 members, some first-timers, sat in the round, sharing their current projects “show and tell” style, and some offered ideas on future philanthropic projects they are willing to organize.

The guild supports teaching and preserving the art of knitting and other needle crafts, but it’s their philanthropic projects that keep local people warm through the winter months.

The guild had a table set up where members placed their completed charity projects, including hats, gloves, scarves and baby blankets.

“We are making hats and gloves to bring to the Atlantic City schools on Nov. 15,” Elero said. “We do a charity project every two months and will decide on our next project soon. We like to keep it local.”

The group recently dropped off four boxes of knitted washcloths and toiletries to the women’s shelter in Atlantic City, she said.

Member Penny Kline, who was unable to attend the meeting on Wednesday, is encouraging the group to consider making items to send to people suffering in the War on Ukraine. The Enchanted Fibers shop in Cape May is collecting items to send to the beleaguered country to help keep families warm this winter.

One of the women, who recently received a box of yarn and knitting supplies from a loved one that included already made squares of pink and white blocks, fashioned them into a baby blanket. Former guild president Liz Slater showed a small blanket she made that was embellished with feathered embroidery stitches.

Ventnor resident Fran Baronowitz showed the bright red collar she was knitting to attach to a sweater she will gift to her granddaughter for her birthday later this month. Her granddaughter is a big Harry Styles fan, and the sweater will replicate the colorful sweater Styles was wearing in a photograph.

Another woman brought some needlepoint to work on during the meeting. She creates art in several mediums and told her counterparts that one of her paintings was accepted into a juried art show in Ocean City – one of 15 art pieces accepted from more than 150 submissions. Because she has macular degeneration, the woman said knitting is now her best medium because it is more tactile.

Another member of the guild said after a few years of caring for aging parents who have since passed away, her involvement in knitting with students at the Belhaven School in Linwood has revived her interest in knitting for pleasure.

Beverly Constant-Bromley of Atlantic City proudly showed her expertly knitted shawl, which drew oohs and aahs from the group.

A few new guild members came from the western part of Atlantic County to knit with their new friends.

Mary Galloway Dovey, a retired teacher from Egg Harbor City who was attending her third guild meeting, said she just completed teaching a knitting course at her church and she brought one of her recent graduates to the meeting.

“The best way to get better at knitting is to knit with other people,” Dovey said, noting that young people easily pick up knitting techniques.

She suggested knitting hats, gloves and scarves for the Seamen’s Church Institute, which provides knitted goods to keep mariners warm as they head out to sea during the winter months. The institute publishes a knitting guide to make neck scarves and hats to specifications that have been customized to best protect the seafarers.

Another woman said she moved to Mays Landing six years ago and has been looking for some knitting companionship.

“I’m so happy to find this guild and make new friends,” she said.

She shared her current project, a “mystery knit along” but she will not know what it will look like until it is completed. She is following an instruction booklet published by knitting designer Steven West.

“We knit, crochet, cross-stitch and quilt. We help each other with issues and have taught many new members to do these crafts,” she said.