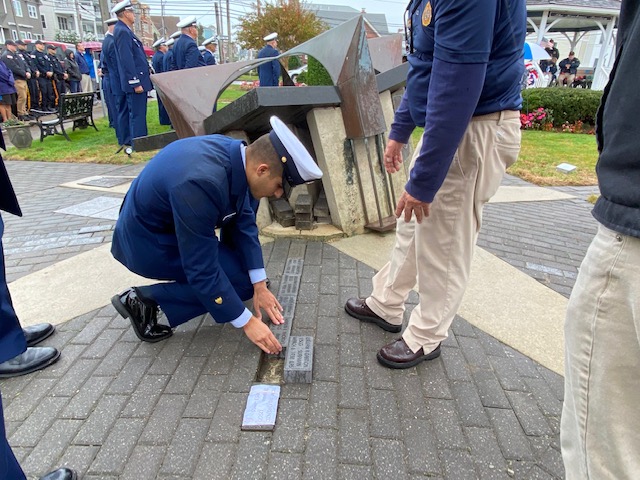 A member of the U.S. Coast Guard lays a memorial brick paver in honor.of a comrade who perished in a boat rescue in 1932.

LONGPORT – The American Legion Post 469 Friday, Nov. 11 honored veterans everywhere, paying special tribute to 10 veterans who have ties to the borough, including five members of the U.S. Coast Guard who perished in a boat rescue during the storm of March 1932.

Despite the rain, residents and visitors joined family and friends of the veterans, many of them standing under umbrellas, for a service at Thomas B. Reed Park for the brief, meaningful service that including installing brick pavers around the sun dial monument installed 21 years ago that depicts important dates in U.S. military history.

Longport Commissioner Jim Leeds spoke on behalf of Mayor Nicholas Russo, who stood at attention with the Coasties from the Atlantic City Station. Russo, who wore his uniform, is a member of the Coast Guard Auxiliary.

Leeds recalled that Veterans Day was originally known as Armistice Day, marking the end of World War I at the 11th hour of the 11th day of the 11th month. The holiday was renamed Veterans Day in 1954 to honor veterans who served in both war time and at peace.

“Imagine the sacrifices they made during wartime. For that they deserve endless praise,” Leeds said. “And for those who served during peace time, they send an enduring message to the enemy that we will always be on guard to defend our American freedoms. Thank you for all your sacrifices, commitment and service.”

One by one, Post Commander Larry Pacentrilli spoke about the individual honorees, as a Legionnaire assisted with the installation of a brick paver bearing their name, rank and years of service.

The first paver honored Army PFC Lenny Petrucelli, who served with the Army Corps of Engineers from 1944-1946 in France and Germany. A South Philadelphia native, Petrucelli settled in Longport with his daughter Maryanne six years ago. He was 96 when he passed away on July 18.

The second and third pavers honored a father and son, both named James J. Gallagher. The father, also born in South Philadelphia, was the son of Irish immigrants from Donegal. He joined the U.S. Navy and served on the battleship USS New Hampshire from 1917-1920, providing escort protection for troops traveling to Europe. Gallagher returned to Philadelphia to work as a storekeeper and marry Irene Patton in 1924. One of his two children, Jimmy, would grow up to become a Marine who served during WWII.

Jimmy Gallagher joined the Marine Reserves in his senior year of high school and was called to active duty a short time later. After boot camp, he was sent to Hawaii where he served until the end of the war. He married his wife Catherine in 1953 and they raised nine children in Lafayette Hill, Pa., summering in Longport. He passed away in 1998.

The fourth and fifth pavers memorialized the military service of twin brothers Anthony “Tony” and Frank DiLorenzo, who today are both 91 years old. Frank was unable to attend, but Tony assisted with the installation of his brother’s paver. Born in Camden, Tony joined the Coast Guard in 1953 and recalls the devastating collision of two ships – the Massachusetts and the Phoenix, which left a lasting memory. He still visits the Coast Guard training center in Cape May, where his military service began.

Frank DiLorenzo became a corporal in the U.S. Army during the Korean Conflict and was injured in the battle of Porkchop Hill. An explosion caused lasting deafness in his left ear.

The last five pavers memorialized the service of five Coast Guard members who were lost at sea trying to rescue a ship floundering in the Atlantic City Inlet during 60-foot high seas. Those who perished included Harold Livingston, William Graham, David A. Barnett, Marvin E. Rhordes and William R. Garton.

Many of those in attendance moved to Borough Hall where they enjoyed a brown bag lunch.

Navy veteran Herb Stern, who served in the Pacific during WWII, said the service was very moving.

“It was very nice to honor the Coast Guard. I’m so happy they honored that valiant rescue that unfortunately ended in death for five Coast Guardsmen,” Stern said.