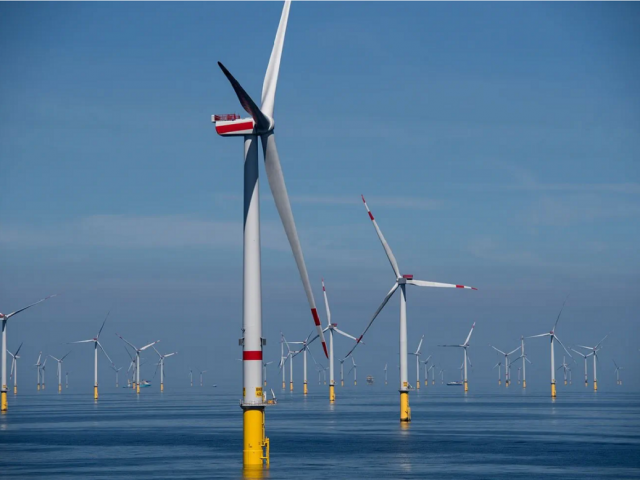 Orsted proposes to build a wind farm 15 miles off the South Jersey coast. This photo shows the turbines for an Orsted project overseas. (Photo credit Orsted)

By MADDY VITALE and DONALD WITTKOWSKI

Claiming that wind energy represents the future, proponents said the project will create thousands of jobs and represents the type of green renewable energy needed to combat climate change and rising sea levels.

The hearing via Zoom stretched on for more than two and a half hours. The purpose of the hearing was to hear from the public about Orsted’s intention to run an underground transmission line that would cut through environmentally sensitive wetlands and beach lots in Ocean City to connect the offshore wind farm to the land-based power grid.

Orsted needs easements for the preferred route and currently the New Jersey Board of Public Utilities is deciding on the matter after attorneys argued for Cape May County and Ocean City on Thursday via a virtual hearing.

“I speak for Protect Our Coast NJ,” Ocean City resident Suzanne Hornick said in public comments at Monday’s virtual hearing. “We don’t want this in any way, shape or form. This should be a question and answer. We should be able to ask questions.”

The original format for the hearing was to be a question-and-answer session, but Orsted did not respond to comments or questions posed by the public Monday. Instead, Orsted representatives said the company will respond in writing after the end of the public comment period for the project on Nov. 28.

“This whole thing is a farce,” said Hornick, who has been one of the most outspoken opponents of the wind farm and of Orsted. “We believe that the BPU already voted to approve this project, so why are we being asked what we think?”

She continued, “It is wrong to not face the public when you want to deface and defile the island.”

Ocean City spokesman Doug Bergen spoke on behalf of the city while reiterating the city’s opposition to the project.

“The city of Ocean City is on record in two matters Ocean Wind initiated by petition to the NJBPU, one seeking to disrupt Ocean City’s beach and wetlands and the other seeking to disrupt Cape May County’s wetlands. The city has objected to the usurpation of the city’s right under NJAC 7:36-26.8 to initiate any application which could result in diversion of lands on Ocean City’s Recreation and Open Space Inventory,” Bergen said.

There were more than 240 attendees on the virtual hearing, which focused on Orsted’s plan to run a transmission line connecting its offshore wind turbines to the land-based electric grid at a former power plant in Marmora. 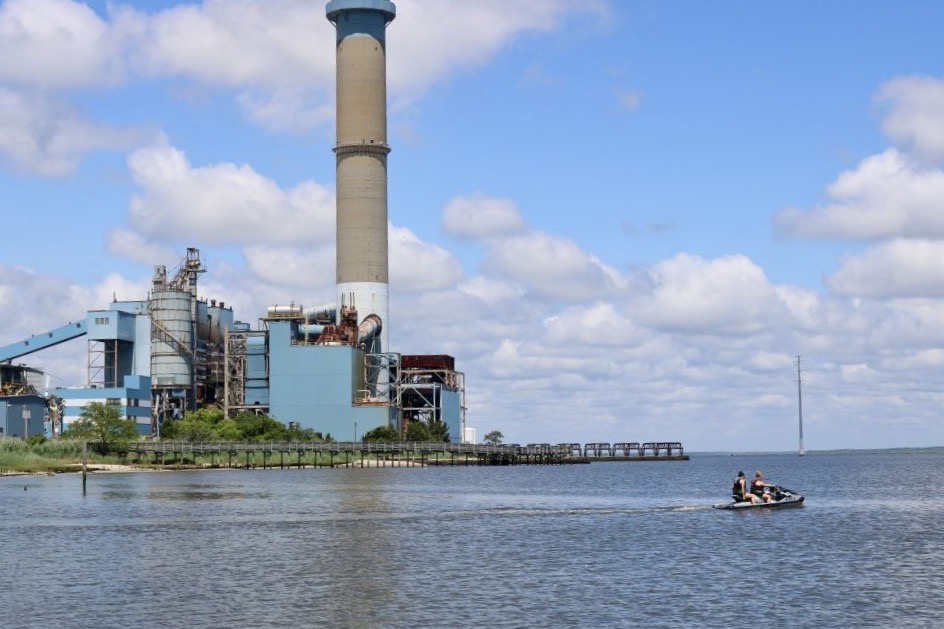 The proposed underground transmission line for the offshore wind energy farm would run through Ocean City and connect with a substation at the decommissioned B.L. England Generating Station (in background) in Marmora.

The underground cable would cut through beach property on 35th Street, then would travel west to Bay Avenue, north on Bay Avenue to Roosevelt Boulevard, west across Peck Bay at Roosevelt Boulevard Bridge and then continue on to Route 9 to property near the former B.L. England Generating Station, according to Orsted’s petition.

Dave Hinchey, senior manager at PSE&G, the company partnering with Orsted on the project, said during the hearing that work on the transmission line would be done during off-peak times, not over the busy summer tourism season.

Hinchey added that there would be no changes to the beach or other areas of Ocean City after construction.

Opponents, though, voiced concerns about the way the hearing was conducted as well as the project’s impact on Ocean City and the environment.

“This process has been out of order from the beginning,” said Ocean City resident and former Councilman Mike DeVlieger, another vocal opponent. “The environmental impact study is not even turned in yet and Orsted and its partners are strong-arming Ocean City before we know how it will impact us.”

DeVlieger also referenced an article published by Windpower Monthly in November that discussed how PSEG’s is revisiting its 25% ownership in Ocean Wind 1.

“PSEG, as far as I know, was Orsted’s ticket to acting like a domestic utility to let the Board of Public Utility take away home rule in Ocean City,” DeVlieger continued. “Orsted is not a domestic public utility. You are slapping us in the face, trampling on our home rule.”

“If PSEG gives up its 25%, how will that effect Orsted’s finances and status?” DeVlieger asked.

Additionally, he pointed out that the GE Turbines that Orsted has specified in their plans are the subject of a patent infringement lawsuit that Siemen’s just won against GE.  Presumably, they will need to find a new vendor and restart their environmental testing, DeVlieger said.

Ocean City resident Julie Norris said, “I am against this project. I feel it would be detrimental to marine life and wildlife in the area. I feel we weren’t notified. The wind farm idea is the wrong idea.”

Resident Barbara McCall said Monday’s meeting was “a box to check rather than engage in a viable public forum.”

She asserted that Orsted does not care about the community. Instead, the company “flippantly” has plans to go through with the project, she said.

“The residents of Ocean City are pawns on a chessboard,” McCall said.

Proponents, some of whom were from environmental groups, said that they were in support of the project.

Maria Santiago from Atlantic Climate Justice Alliance said, “We support the Ocean Wind 1 project as a clean energy project that will benefit overburdened and communities of color to tackle the effects of climate change.”

“I feel it is time to make the connection between offshore wind and putting local fishermen like me to work, to keep our clams and our scallops healthy,” he said.

Another wind farm supporter, Brook Crossan, said that the biggest concern is the environment.

“Climate change is the largest threat to civilization as we know it. I wake up every day fearing for the future that I will be leaving to my grandchildren,” Crosson said.

“I am focused not on our beach views, but our back bays,” she said, adding that she fears higher tides and wave action with continued climate change. “The city’s attempt to derail this project is misguided. Rising tide is of far greater concern. I strongly urge the city to reconsider the project.”

On Thursday, the New Jersey Board of Public Utilities heard from attorneys representing Cape May County and its shore towns who criticized Orsted for its preferred route for the transmission line to serve the wind farm. Orsted needs easements to cut through a Green Acres parcel in Ocean City.

Orsted’s proposal is to put 98 towering wind turbines in the ocean, 15 miles offshore from Atlantic City to Stone Harbor.

The wind farm is currently in the planning and permitting phase and is scheduled for completion by 2024. Plans call for a 1,100 megawatt project that Orsted claims would create thousands of construction jobs and power over 500,000 homes.

The diversion application can also be accessed online through New Jersey Department of Environmental Protection’s website at https://dep.nj.gov/otpla/diversion-application-information-page-ocean-city-ocean-wind-project/. 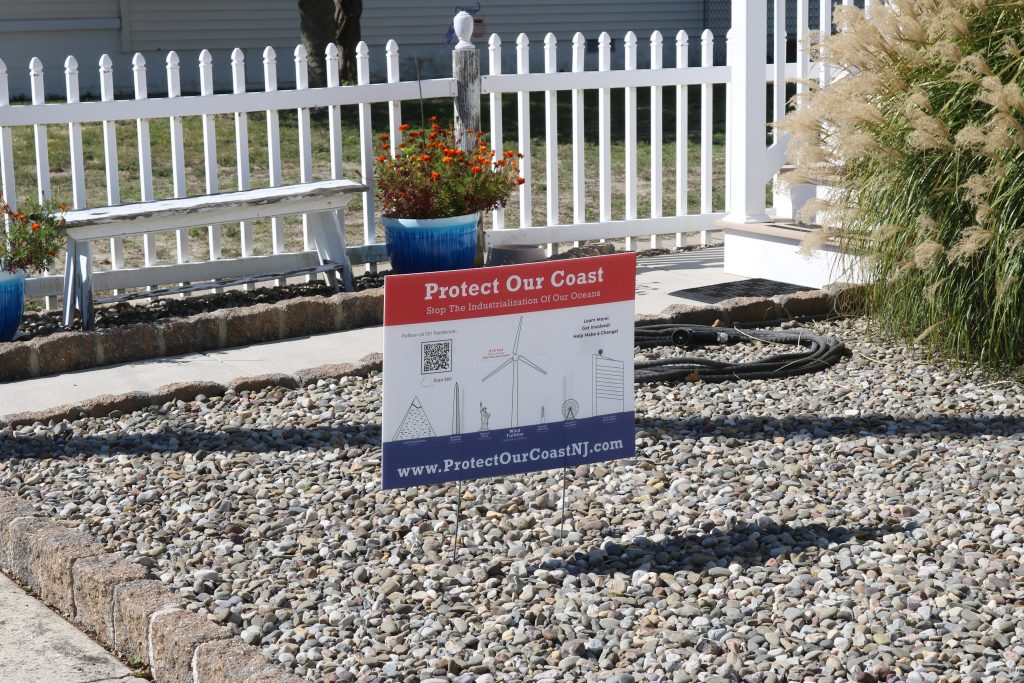 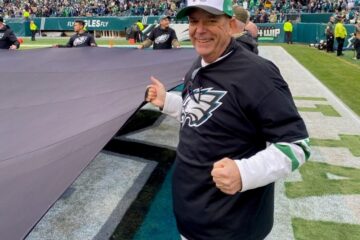 By MADDY VITALE and DONALD WITTKOWSKI Tim Kelly was a spokesman, reporter, author, colleague, friend, and a devoted son and father who made it all look easy, even when it wasn’t. All anyone has to Read more… 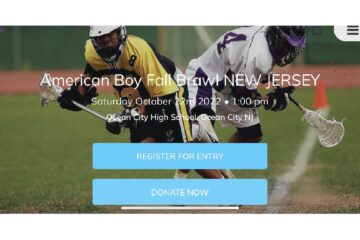 American Boy has one focus – addiction. We help families find treatment, offer scholarships for those who can’t afford it, and advocate long term care options that result in the best possible outcome for recovery. Read more… 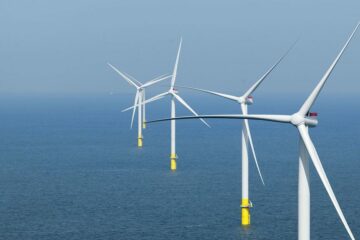 Ocean Wind, LLC (Ocean Wind 1) will hold a virtual public hearing 6 p.m. Monday, Nov. 14. The hearing was originally scheduled for Oct. 3 but was canceled due to inclement weather. The purpose of the Read more…