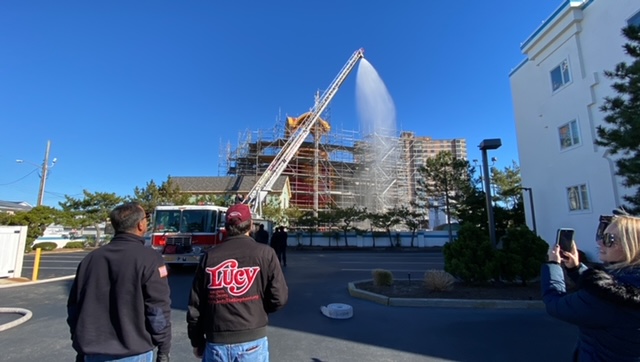 MARGATE – Lucy the Elephant, the city’s beloved 141-year-old pachyderm, took a cold shower Monday morning to find out if she’s water-tight after a $2.3 million makeover.

Lucy, a National Historic Landmark, has been under wraps for the last 14 months as she shed her old skin for a new metal coating and some structural repairs. The Margate City Fire Department did the honors, spraying her at intervals over an hour-long period, as a crowd of fans watched from the sidewalks, Lucy deck and the top steps of Beach Patrol Headquarters.

The spray test revealed that Lucy was waterproof, except for a few spots, Save Lucy Committee Executive Director Richard Helfant said.

“The verdict is both good and bad,” he said. “The good part is that none of her new metal skin leaked. The bad part is that the glass floor of her howdah and a few windows were leaking.”

“There are 17 windows in Lucy,” Helfant said. “A few of the windows will be sealed permanently.”

Helfant said the purpose of the shower was to identify leaks, which was successful.

“The additional needed repairs should not delay our grand opening,” he said. 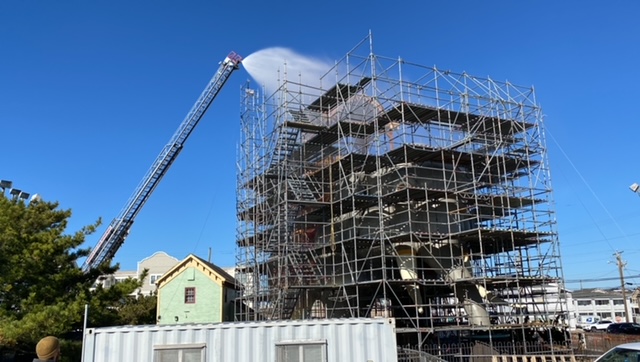 Commissioner John Amodeo, who holds a seat on the Save Lucy Committee, said Margate would continue to support Lucy as the city’s main attraction.

“We know how important she is for the tourism industry. She brings a lot of people into town, which is good for our businesses,” he said.

Little Milo Hayward watched the spectacle from the deck next to the snack stand wondering what Lucy really looks like under the scaffolding. 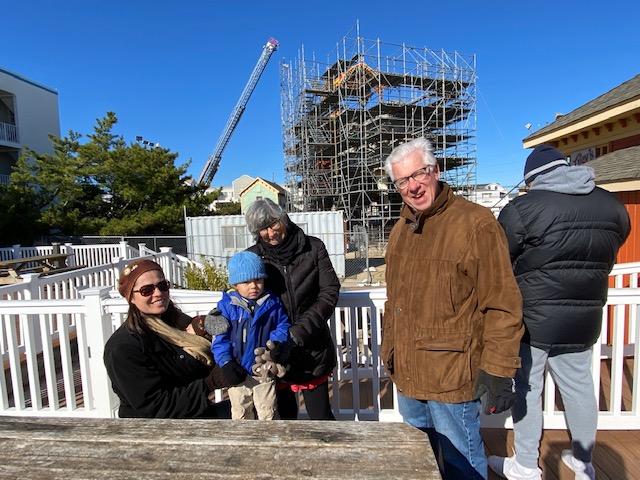 His mom, Anne Hayward of State College, Pa., said she was visiting her parents, Penni and Andy Starer of Ventnor, and decided to bring her son to the historic event.

“Milo has never seen Lucy the Elephant before, so we thought this would be a good thing to do on this cold, sunny day,” she said.

Milo will get to meet Lucy in person another day, she said.

The re-sheathing project came in $1 million over budget, Helfant said.

The Save Lucy Committee is currently running the Lucy’s Life Preserver fundraiser, in which anyone who contributes $1,000 or more will get their name engraved on a bronze plaque that will be installed inside the elephant, a gold pin commemorating the restoration project and a lifetime membership to the Friends of Lucy.

“Lucy was saved from the wrecking ball with 5- and 10-cent donations, so every penny helps,” Helfant said.

A second fundraiser will be held 8 p.m. Sunday, Dec. 11 when Deana Martin, Dean Martin’s talented daughter, performs in a concert at Resorts Casino Hotel’s Superstar Theater, where Helfant worked in the Entertainment Department years ago.

“Resorts is donating the use of the hall, so every penny of the ticket price goes directly to Lucy,” he said.

Martin will perform songs from her dad’s Rat Pack days and the Great American Songbook, with a few holiday songs thrown in for good measure.

Tickets are $35, $50 and $125, with the highest priced tickets including seats near the stage, a post-concert dessert reception and a meet and greet with the star.

A few days later, Lucy will get her grand unveiling. Helfant said the tentative dates for the unveiling are Dec. 14-15. The Save Lucy Committee is waiting to hear back from Gov. Phil Murphy’s office on his availability.

“We want him to come to the event. After all, his administration funded a big portion of the project and we want very much for him to be here.”

For more information about how you can support Lucy’s big makeover, or to purchase tickets for the Deana Martin concert, see lucytheelephant.org.