Ventnor – A community that celebrates culture 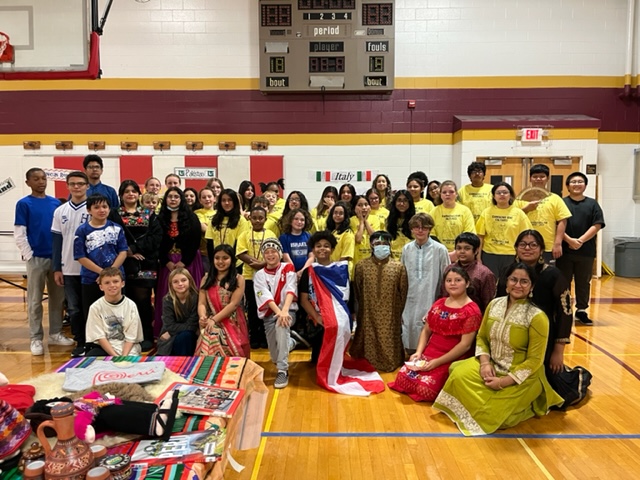 With students hailing from every corner of the world, Ventnor Middle School hosted its annual Multicultural Fair Tuesday afternoon to embrace how the students’ differences make them stronger together.

Delectable smells radiating from family recipes, vivid colors blending from the many flags, and striking patterns flashing from traditional garments and artifacts filled the gymnasium. Fifth- through eighth-graders wait all year for this day to celebrate what makes them unique.

“The fair helps us all come together as a family and learn about each culture,” said Sasmita Edla who chose India for her showcase with her friend Camila Castro.

Teachers Lori Henry and Debbie Duff coordinate the event where students partake on a voluntary basis. Ventnor Middle School provides the materials needed, while the students bring traditional food and memorabilia to educate others.

Duff says the diversity is what brings the students together. This holds true not only during the fair but also every day of the school year.

“That is the beautiful thing about this school,” Duff said. “These kids are so accepting of everyone. No matter where they are from, it is like everyone is the same. It is truly amazing and like no other place I have been.”

Some students choose a country for the fair that aligns with their heritage. Other students partner with a friend to learn more about another culture. About 30 projects were displayed.

“My family thinks it’s really awesome that I am doing my project on India,” said fifth-grader Eishana Desai whose parents were born in India. “They are very proud of me.”

Her friend Devon McCarron was excited to work with her.

“It means a lot to me because I didn’t know anything about India,” McCarron said.

Hewitt said it did not matter that they came from different cultures. The two simply had fun working together.

Yonzyel and Yanyxza Lopez showcased Puerto Rico. The siblings continued their family’s Puerto Rican legacy that their older sisters started at the multicultural fair years before.

The fair has been in existence for over 20 years. Jane Rosenberger introduced it for students whose second language was English. Overtime, more students wanted to get involved to celebrate their heritage or learn more about others.

“Next year, we are going to do Poland or Germany!” Polinski said with excitement. He looks forward to exploring other parts of their identities.

For some, this project makes them feel closer to home. Om Parekh just moved here from India six months ago. He was eager to share his recipe for Punjabi Aloo Paratha, a traditional dish.

Alejandra Fernandez says it was important for her to highlight her small country of El Salvador.

“It feels good to be closer to a part of my heritage that I don’t usually get to celebrate because most of my mom’s family is still in El Salvador,” Fernandez said. “So it means a lot to me to be able to celebrate it here at school.”

Eighth-grader Amir Delgado won the shirt design contest. His hand-drawn design was featured on the shirts worn this year. The shirts read, “Embracing Our Cultures.”

Embracing their cultures is just what the students did here in Ventnor, becoming an example for citizens all around the world.