Ventnor sand sculpture draws a crowd, creates awareness for the plight of the whales 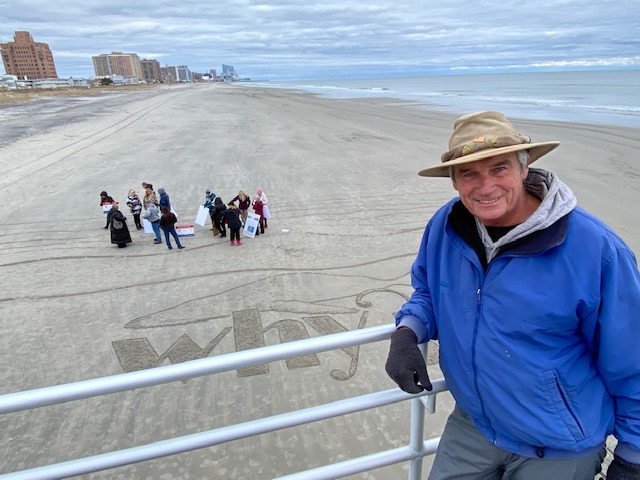 VENTNOR – Local sand sculptor John Gowdy and his wife drew a whale on the beach next to the Fishing Pier Saturday in advocacy for pausing the offshore wind turbine project until scientists can figure out why humpback whales are dying and washing ashore in record numbers.

“We’ve never seen this many whales wash up on the beach,” Protect Our Coast NJ supporter Frank Leone said.

Within 24 hours of coming up with the idea of doing a whale sand sculpture on the beach, Leone, a civil engineer, found Gowdy, a local sand sculptor who had the same idea.

“We are trying to bring attention to the concern about whales washing up on the beach and we coordinated and got it done,” Leone said. “My goal is to make people know there’s a wind farm project going on, educate people about it, and ask to delay the project until they reach a conclusion about why these whales are dying.”

A small group of shore town residents gathered on the beach holding handmade signs asking a simple question, “Why?” 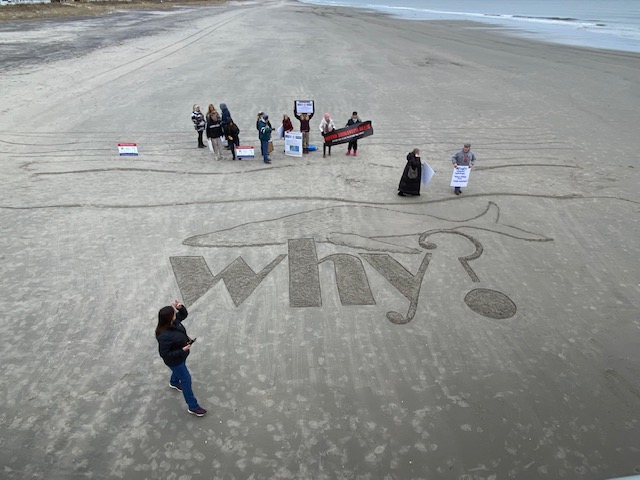 Why are whales dying in record numbers, advocates ask.

Leone said he believes preliminary hydrographic work to survey the ocean floor using sonar is disturbing the whales and causing them to become disoriented.

“Whales are sensitive to sound and it could be the cause. Can I prove it? No, but to look the other way is irresponsible,” he said.

In recent weeks, environmental groups have taken different sides in the controversy over eight dead whales that washed up on the beaches of New Jersey, New York and Maryland since December. A ninth dead whale washed up on a shore in Virginia according to published reports. In the last several weeks, whales washed up in Atlantic City, one in Brigantine and one in Strathmere.

On its website’s frequently asked questions about wind farms and whale deaths, National Oceanic and Atmospheric Administration, or NOAA, said there is no evidence to support speculation that noise resulting from wind farm development is responsible for whale deaths.

“We will continue to gather data to help us determine the cause of death for these mortality events. We will also continue to explore how sound, vessel, and other human activities in the marine environment impact whales and other marine mammals,” the website states. 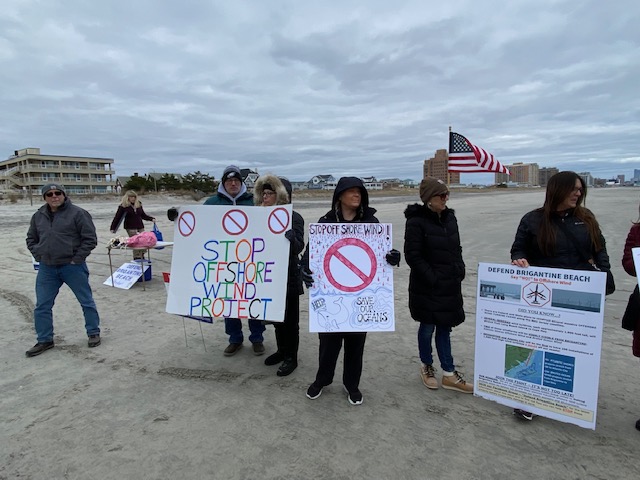 Local officials, including NJ State Sen. Vince Polistina, who is also an engineer, Ocean City Mayor Jay Gillian and Brigantine Mayor Vince Sera have called for a moratorium on the project until more research is conducted.

Polistina (R-Atlantic), who said he is not against the wind project, urged Gov. Phil Murphy to order a suspension of all offshore wind development activities until a full and proper investigation can be conducted to determine if there is any connection between the deaths and ongoing work.

Gillian said the city, which has advocated against the project for several years, said the city will continue to gather information about whale deaths.

“We will continue to gather facts from the appropriate agencies in an effort to determine the cause and if there are any actions we should take locally to address this matter,” he said Friday in a statement. “In the meantime, I believe there should be a pause in offshore wind activity in the ocean until we are assured that this is not a contributing factor.” 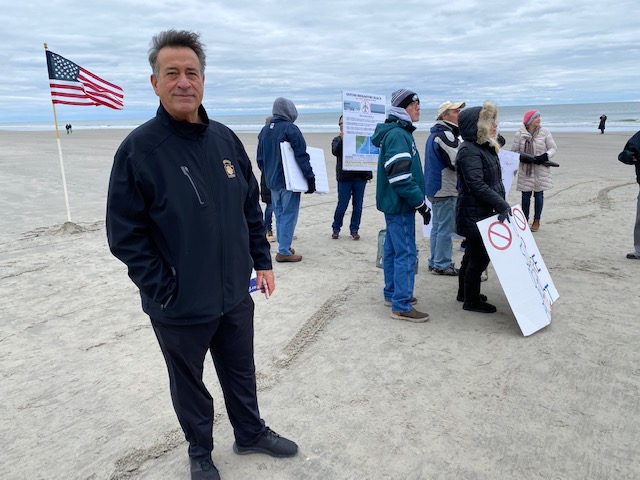 Leone is suspicious because environmental agencies have been silent on the issue.

“The loudest thing I’m hearing is their silence,” he said.

He said Orsted, the company building the wind farm, has been doing a poor job educating the public about the project. He said some of his neighbors in Brigantine know very little about it.

“I’m not against green energy. I have solar on my house and drive an electric vehicle, but this is not the way to achieve green energy,” he said.

Entertainer Beth Tinnon stood near the sculpture holding a sign.

“I’m against industrialization of the ocean,” she said.

She said she has watched videos online about how offshore wind farms can cool the ocean and change the habitat of marine life, from small plankton to large mammals.

Peggy Dennison of Defend Brigantine Beach said their group is “small but feisty.”

“We formed to spread awareness of the wind farms being planned,” she said. 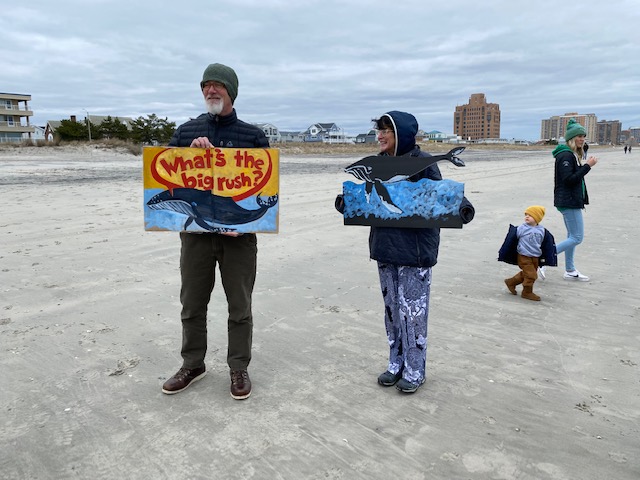 Michael and Jeanne Butler drove from Cape May County to advocate for the whales.

Michael Butler and his wife Jeanne, drove all the way from the Villas in Cape May County to support the activists.

“I’m not a scientist, but we would like them to take a pause,” he said. “We want to know if there is a connection. I believe we are on the right path to having sustainable energy, but we can’t extinguish these mammals for it.”

Keith Moore, the spokesperson for Defend Brigantine Beach, said his group will continue to work to get the word out about the wind farm. He believes Orsted should provide more information about the project to shore communities that will be affected.

“People want to understand the impact on the beach ecology and economy,” he said.

Sera also called for a moratorium.

The Brigantine Council passed a resolution calling for a suspension of development activities.

“This resolution isn’t about being for or against ocean wind projects, it’s about our due diligence and getting real scientifically supported facts about the potential impacts that these ocean wind project could have on whales and other marine life.” 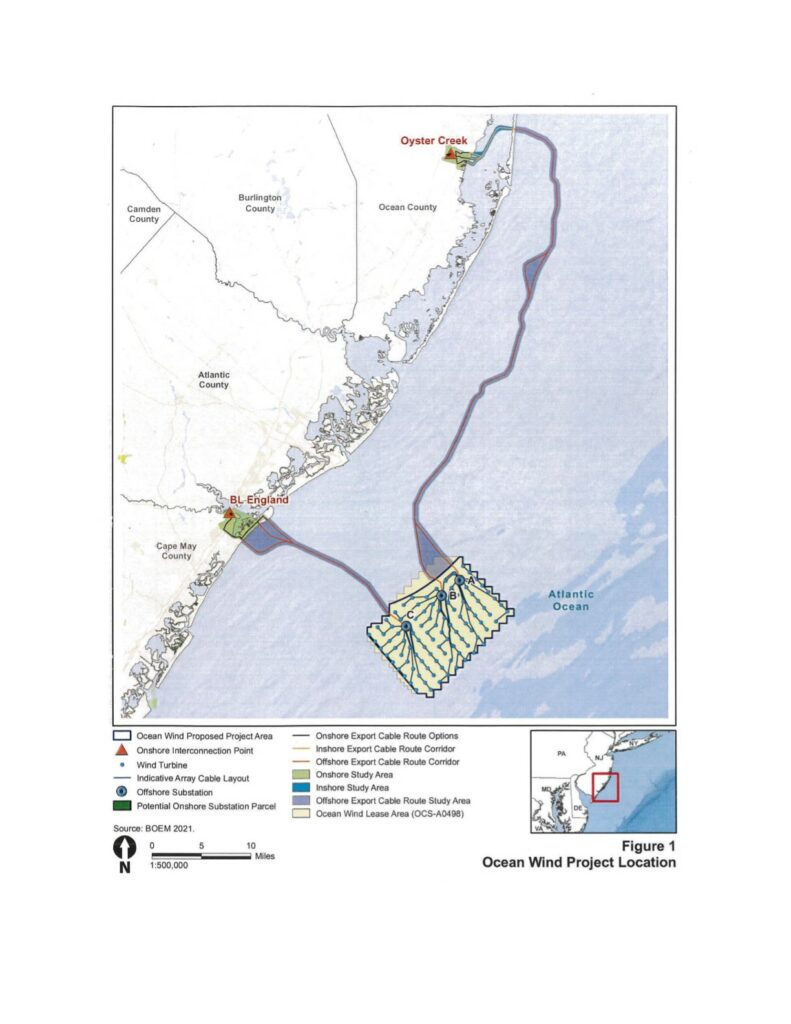 Orsted said its project is not responsible for the whale deaths and maintains it is being careful to avoid negative impacts on marine life.

Several advocates pointed out that NOAA Fisheries has an agreement with Ocean Wind, LLC, an Orsted subsidiary, for the “incidential take” of marine mammals during the construction of the offshore wind facility. The Incidential Take Regulation governs the authorized take of small numbers of marine mammals over a five-year period during construction, including deaths from pile driving, explosives, geophysical surveys, unexploded ordnance or munitions.

Ventnor Commissioner Lance Landgraf said the Board of Commissioners will consider a resolution at the commission’s Jan. 26 meeting supporting Polistina’s call to halt the project until more information about whale deaths is available. 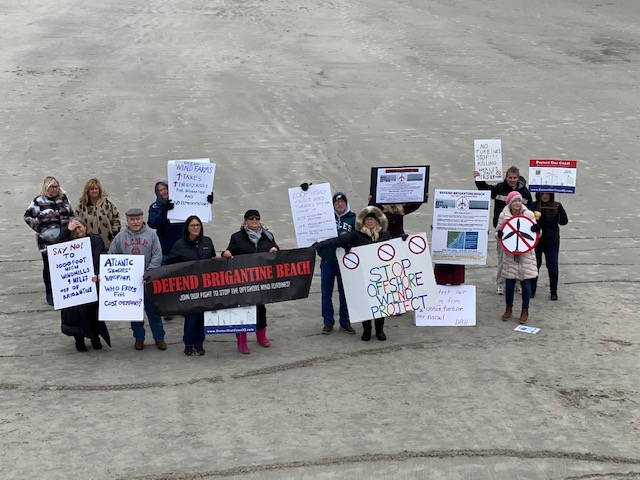 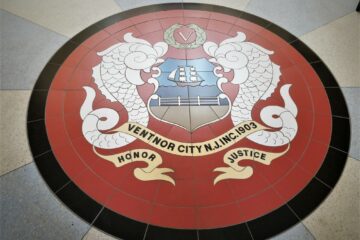 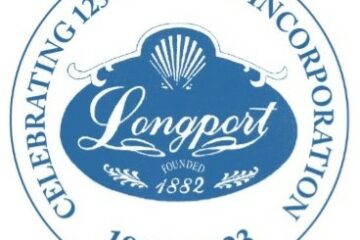 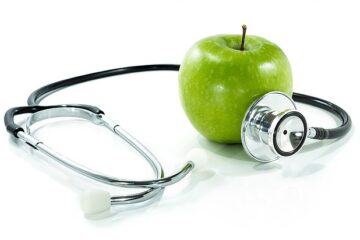