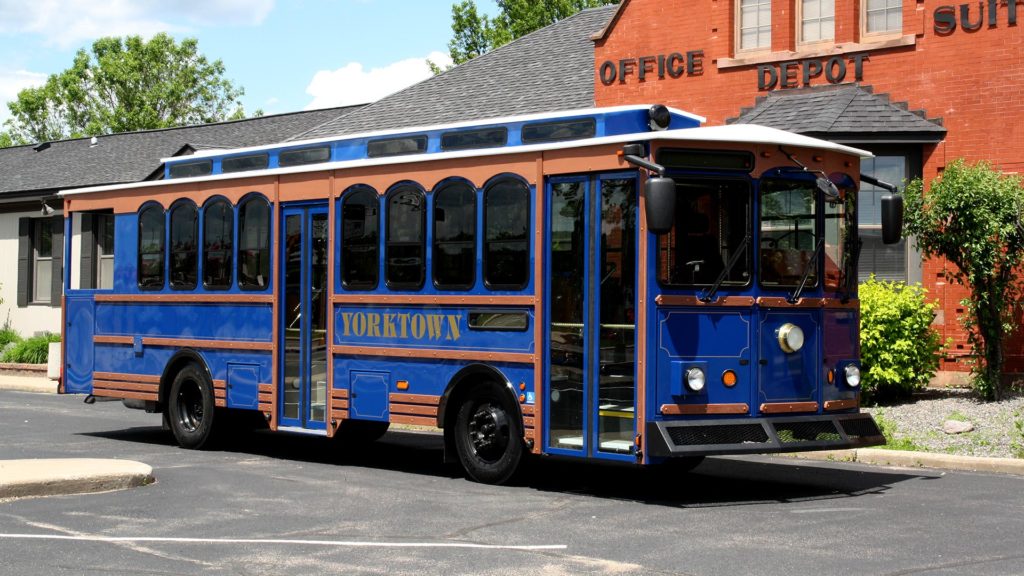 MARGATE – Over the last year, Margate officials have made a concentrated effort to address the city’s parking shortage by developing parking spaces on city owned properties.  But some of those parking areas are a long walk to the beach.

To assist beach-goers, restaurant-goers and shoppers seeking to find a parking spot, the city is considering remote parking at various locations and operating a trolley service to shuttle people around town during the summer months.

At the request of Commissioner Maury Blumberg, DawnMarie Bascelli, the mayor’s executive assistant, reported Thursday, March 21 that she has conducted preliminary research into hiring an outside company to operate a trolley service within the city that connects major points of interest, such as commercial areas, cultural attractions and handicapped beach access points.

The city could purchase or lease a trolley and hire drivers, or it could contract with a private company to implement a trolley service similar to those in Ocean City and Cape May.

“A trial would be a more intelligent option for us at this point, to see if there is interest,” she said.

According to Bascelli, estimates are very preliminary, but it could cost as much as $500 a day for an 8-hour route over 100 days, she said. The trolley service could be extended to shoulder season events, as well, she said.

City officials should decide if they will charge a fare, how much it should be and if it could be offset with support from local business owners, she said.

Blumberg asked if Ocean City residents and visitors like the service provided there.

“The one year they didn’t have it, it wasn’t good,” said Zoning Officer Roger McLarnon, who worked in Ocean City for several years.

Administrator Richard Deaney, the former administrator in Ocean City, said the trolley works well there, but the service is quite different from what the city is proposing. The route in Ocean City goes from one end of the island to the other traveling one continuous loop, he said.

Ocean City’s Boardwalk Trolley, operated by the Great American Trolley Company, costs $3 each way or $5 round-trip, and runs every 20 minutes from 5 p.m. to midnight. The company also runs routes in the Wildwoods, Rio Grande and Cape May.

Bascelli said officials might prefer the nostalgic look of the trolley as opposed to the boxy jitney, especially since Margate once had a trolley.

“(The choice) should be based on the experience you want your residents to have,” she said.

Margate is considering approximately 10 stops, including the city’s two business districts, Lucy the Elephant, Bloom Pavilion, and could run on weekends only, Bascelli said.

Marven Gardens resident John Sewell, who is an ardent critic of the board, said the Margate Business Association, which gets financial support from the city, should pay for the trolley service.

“It’s a ridiculous. It should be self-sustaining,” he said. “You are already into the property taxpayers for $85,000 for the MBA yearly. They should fork-out this kind of cash, instead of going to the taxpayers, especially the senior citizens.”

The Atlantic City Jitney Association tried to operate a service between Ventnor and Margate on a trial basis two years ago, but it was underutilized by the public and the association scrapped the route.

Commissioner John Amodeo said Bascelli should consider advertising opportunities to raise the $50,000 needed to operate the service over the summer.

The city made no decisions on the matter and will continue its fact-finding mission.

The commissioners also discussed the leasing of 18 parking spaces at a city-owned lot on Washington Avenue near the business district. The city traditionally leases the spaces each year at a minimum bid of $200 for the year.

“It’s been the same for many, many years,” Deaney said, asking the board to consider raising the minimum bid amount.

Deaney suggested the city could consider revising its program to limit the lease to seasonal parking, so the 18 spots can be available for others to use during the off-season.

The spaces are usually leased by local business owners for us of their customers and employees and some lease more than one space.

Other areas are being eyed for parking include at the Eugene A. Tighe School and at the Public Works yard.