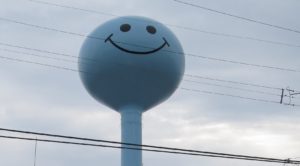 LONGPORT – Local residents questioned the Board of Commissioners July 24 on a planned ordinance that would authorize a deed of dedication for a perpetual public access easement over street ends leading to the beach.

The easement would provide the public with access to the beach in perpetuity over 53 street ends, which are already used as access points for beachgoers, fishers, surfers and the general public. The deed of dedication would fulfill the Department of Environmental Protection’s new requirements to provide beach access in order to obtain a General Beach Maintenance Permit from CAFRA. Longport’s beach access permit expired at the end of summer 2017, and the borough is providing limited maintenance with an expired temporary maintenance permit.

The irrevocable deed of easement will provide access required under the state’s recently passed Public Trust Doctrine to ensure the public has perpetual access to tidal waters for fishing, bathing and recreation.

After residents questioned the need for such an easement, the borough withdrew a previously introduced version of the ordinance to allow borough solicitor Pacifico “Pat” Agnellini to refine the “broad” language in the ordinance and hear additional comments from the public.

The ordinance was discussed in length at the meeting, but it was not introduced.

“The ordinance elevated concerns about what the state will do with the easement,” Agnellini said.

He said the state’s new regulations do not specifically pertain to Longport, which provides access at all its street ends, and that the DEP took a “one size fits all” approach to the public access issue.

“The deed ensures the governing body cannot eliminate or significantly restrict access to the beach,” he said.

Agnellini said the borough is cooperating with the DEP in an attempt to avoid costly litigation.

“The problem is it’s expensive and we don’t know what we will wind up with,” he said. “At the end of the day, my recommendation is we give the DEP some sort of easement document that protects the access points to tidal waters.”

The state had also requested easement over the beach to the tidal waterway, but some properties along the beach have riparian rights that would have to be carved out, and the changing tides constantly alter the shoreline, he said.

Engineer Richard Cater suggested changes to the language of the ordinance that would limit the width of the easement to the width of the dune crossovers provided by the Army Corps of Engineers when they built the dune, which is 8 feet.

“The DEP has a rule they want to enforce uniformly with everyone,” Agnellini said. “We can do it this way and see where it goes. But we want to cooperate as much as possible so we can get through this summer. Right now, we are cleaning and maintaining the beaches without a permit.”

The DEP could shut the beach or fine the borough, he said.

“We are not the problem they have in North Jersey. We’re just caught in the fact that everyone has to do the same thing,” Agnellini said.

Commission James Leeds agreed the width of the easement should be contained as much as possible to provide “reasonable and meaningful access.”

“I have a problem with the DEP reading more into (the Public Doctrine law) and coming in and telling us we have to do this and that,” Leeds said.

Several members of the public who spoke during the meeting held the same opinion and expressed concerns that the state could also require additional parking and rest rooms.

The borough had suggested passing an ordinance that would prevent the borough from ever vacating street ends without DEP approval, but the DEP contends that a future commission could easily rescind such an ordinance, Agnellini said.

Resident Dennis Deflorio asked if the ordinance would give the state the ability to “dictate to us what happens with the street ends, be they the addition and location of public parking, rest rooms or any other public amenities like showers.”

Agnellini said the ordinance simply prevents the borough from ever impeding access to the beach, and only allows “transit over” the street ends.

“In a lot of communities, bathrooms are coming. I don’t know if they would do that here,” Agnellini said.

The borough has already doubled the number of public restrooms available to the public when it agreed to open the rest rooms at Borough Hall on weekends following the dune construction project.

“We’ve taken a lot of public funds to replenish the beach, repair jetties and bulkheads, revetment, all paid for through state and federal funds,” Mayor Nicholas Russo said.

“We also pay state and federal taxes, so we are not getting it for free. If they are turning this into a state park, why should the taxpayers of Longport pay for all of the amenities of a state park?” Deflorio said. “In the interest of getting the permit, do we sell our souls to the devil and give them carte blanche?”

Deflorio said he has no problem giving access to the public, but he would like “to be 1,000% sure that at some point my kids aren’t going to wake up to find out that some bureaucrat in Trenton decided to build amenities that we would find objectionable in town.”

He said the borough should be the entity that decides if it needs more rest rooms and where they should be located.

Representing the Longport Citizens Alliance, which includes seasonal and year-round residents who are “deeply concerned” about the issue, Jim Hammerstead said the group has hired an attorney to monitor the process.

“We feel the ordinance should protect the rights of property owners while at the same time recognizing the substantial public access already provided in Longport,” he said.

“We need to form an alliance and stand up to them,” he said, saying the borough is being “bullied.”

“Not everyone views what the DEP is doing as DEP being the bully,” Agnellini said. “There are a lot of people who view this as the DEP protecting the little guy who doesn’t have the wherewithal to afford a beach house. There’s a lot of people who think they are not doing enough.”

“No one disagrees with that,” Stetser said. “It leaves a really bad taste in my mouth when one hand says this is about beach access, and the other hand is saying it’s about the ability to allow the municipality access to the beach to clean it. It’s apples and oranges. We should punch back, show a united front, join other municipalities and say enough is enough.”

“You’re asking us to give up our rights,” resident Joel Goldman said, agreeing to limit the access to 8 feet.

“We already give (the public) 30 blocks of access to the beach, we don’t have to give up any more territory,” he said.

The board held off introducing the ordinance until a later date.