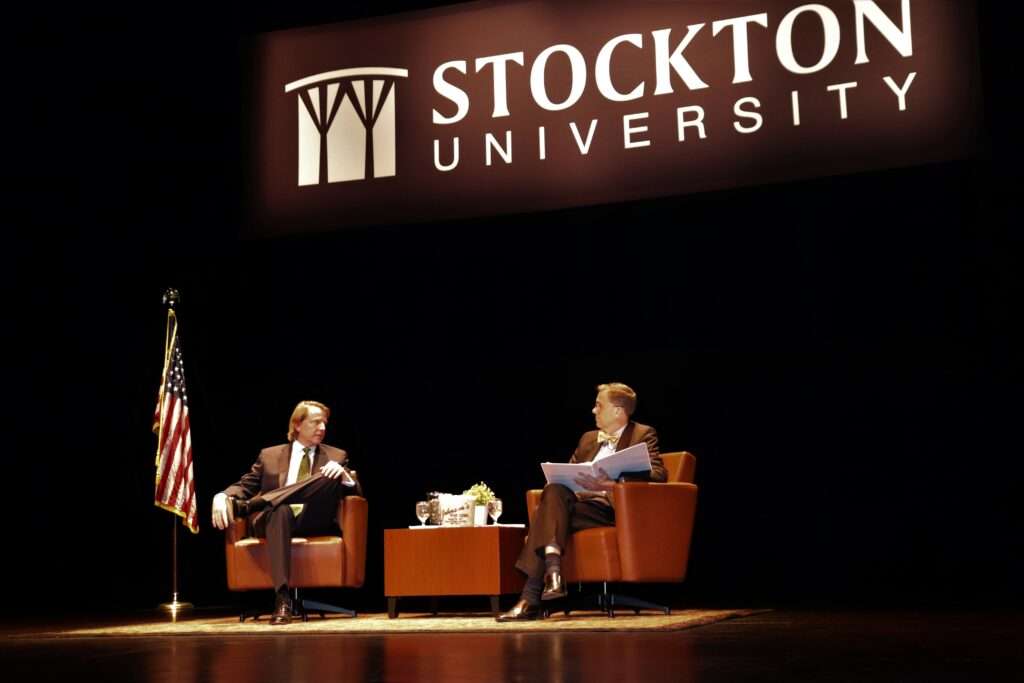 Stockton/Don McGahn talks with Bill Hughes during a program at Stockton PAC, Jan. 23.

GALLOWAY TOWNSHIP – Longtime Republican attorney Don McGahn doesn’t like the government. He grew up in a family of Democrats, including his uncles Pat “Paddy”  and Joe McGahn, but chose to follow Republican ideals.

“I’m a Republican because I enjoy liberty. I don’t like the government,” he told his friend William H Hughes, Jr., the son of former Ambassador and longtime Democratic Congressman for whom the William J. Hughes Center for Public Policy at Stockton University, which hosted the talk at the Stockton PAC Thursday, Jan. 23, is named.

McGahn and Hughes avoided hot button issues, such as the impeachment of President Donald J. Trump, his client for the last couple of years.

His uncle, Democrat Joe McGahn upended the political machine run by longtime Republican power broker Hap Farley, but his parents were not involved in politics. He was initially registered as independent.

“I probably disappointed them by going into politics,” he said.

However, Don McGahn said he came of age in the 1980s when Ronald Reagan was president. The family has come full circle with McGahn’s work in getting Donald J. Trump elected president.

Hughes called him “one of the foremost experts in election law.”

President George Bush appointed him to the Federal Election Commission in 2008, where he served as chairman.

“I’m one who thinks more speech is better in a free society in our Democratic experiment. Removing restrictions on speech is generally a good thing,” he said. 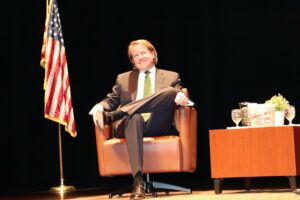 He recalled the days when the “big money” in elections was mostly used for television advertising.

“My perspective is that we are evolving out of the idea of big, big money buying a bunch of TV ads really doing much to influence voters. That was the norm 10-15 years ago. The internet has leveled the playing field. Now it’s no longer the rich guy with the printing press who controls what people hear. Everyone is their own version of a journalist and everyone has their own printing press,” he said.

After representing candidates at all levels of government, he developed a reputation for getting people elected.

“I would be one of the people you call if you’re running for high office,” he said.

He said he connected with Trump while he was representing Citizens United and many Americans were feeling left out.

McGahn said Trump’s philosophy resonated with him and he thought, “this guy could actually win,” he said. “At the time, everyone thought I was nuts. I didn’t think any of the regular candidates had a chance to beat Hillary Clinton.”

McGahn was the man who got Trump on the ballot in all 50 states, filed financial disclosures and helped the campaign comply with campaign finance regulations and selecting delegates.

He said Clinton was in Texas, while the Trump was surging in the Rust Belt.

“Election night for a lawyer is never really a celebration,” and he has never been to a victory party, he said.

He watched on TV while he was reviewing election results and preparing for recounts in Pennsylvania, Michigan and Wisconsin, he said.

The president asked him to be the White House counsel over Thanksgiving weekend, he said, recalling that during the time of FDR, the counsel was basically the president’s speech writer and wrote The New Deal.

“All this changed with Watergate,” he said. “Post-Watergate there was a big push in Washington for the DOJ (Department of Justice) to be independent of the president.”

Now the job entails counseling the president on the powers of the office under the Constitution and presidential authority, reviewing contracts, dealing with human resources issues, helping White House staff with ethics, obtaining security clearances and reviewing and occasionally writing executive orders. He oversaw a staff of 25-60 lawyers depending on how busy the Office of the President was.

“My client was the President, with a capital P,” he said.

He said one day he was reviewing the contract for the eggs needed for the Easter Egg Roll and then being called to the Situation Room “for grown up stuff” to discuss a sensitive national security issue.

He has tapped several former White House counsels on both sides of the aisle for advice, he said.

Although the Legislature and Judiciary operate under strict rules, “there is no manual on the shelf in the White House that gives you the right answer” for the Executive Branch, he said.

He said the President’s lawyer should not be one to develop policy, but “only give legal advice,” he said. “I had a reputation as being someone who is not shy about saying what you can and can’t do.”

Part of legal analysis has to factor in political situations, but the lawyers should not play politics, he said.

“If people think you’re playing politics with your legal advice, they stop listening to you and you become just another voice in the room, and things tend to go south from there,” he said.

Hughes asked if the president’s Twitter feed is a good way to communicate his policies, McGahn said it is, and that the feed is part of the historical records being held in the national archives, even for tweets that are deleted.

“It is compliant with applicable federal laws that apply to any other federal record,” he said.

One of his biggest contributions was finding and vetting candidates to replace 107 of 179 federal judges, including conservative Supreme Court Justices Brett Kavanaugh and Neil Gorsich, which has changed the face of the judiciary, he said.

His goal was to find judges who take the fundamental “textural” approach to laws “as they were written,” he said.

Considering how divided the country is, when asked about the ability of legislators to compromise, McGahn said it will take time to get back to the Ronald Reagan-Tip O’Neill days.

Legislators don’t socialize much anymore, other than on the House floor where legislators tend to play to the television cameras, he said.

“The House and Senate used to function a lot more away from the cameras,” he said. “As soon as you make into a TV show, I think it changes how people behave and it makes it tough to compromise. If they would socialize more, they might have more of a common understanding.”

As far as the two-party system goes, McGahn said the parties have “decoupled from the norm,” and the traditional party breakdown is not producing results like it used to.

“We are in a time now where the traditional party breakdown is not producing predictable results,” he said. “The parties no long have the lock they had on people.”

After 18 months advising Trump, five months longer than the average counsel’s tenure, he knew it was time to seek other opportunities.

“I did all I could do. Now it’s time to get reacquainted with things like sunlight,” he said. “It’s time to do something different.”