Some fans, some not, for Orsted’s off-shore wind farm 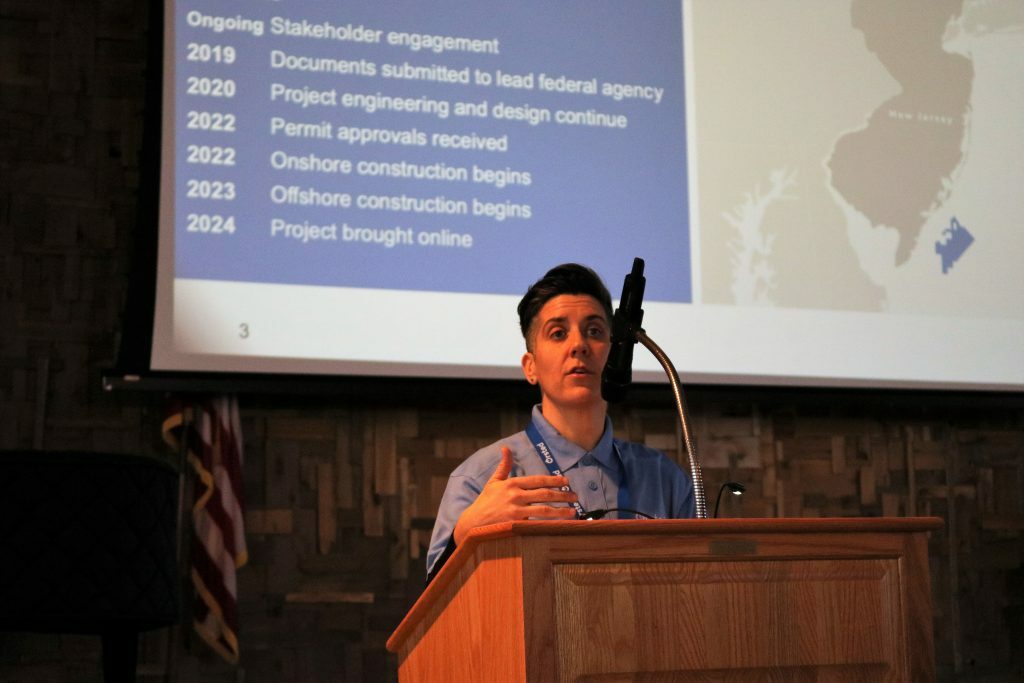 Kris Ohleth, senior stakeholder relations manager at Orsted, goes over some slides in a presentation at the town hall meeting held in Ocean City Saturday morning.

Standing behind a piece of Scotch tape that was about 45 inches away from a rendering of a proposed ocean wind farm, William Henry took a long look Saturday morning at a town hall meeting at the Ocean City Tabernacle.

Fixed to the spot, he peered at the visual as if he were standing on the shoreline, gazing out at the ocean.

Henry, an Ocean City resident who is a State Police lieutenant and station commander at the Woodbine barracks, said he sees a wind farm as a positive for the environment and something that could even help him when he is out spear fishing.

The turbine structures become a man made reef for marine life, which could attract his catches along the way, he noted. 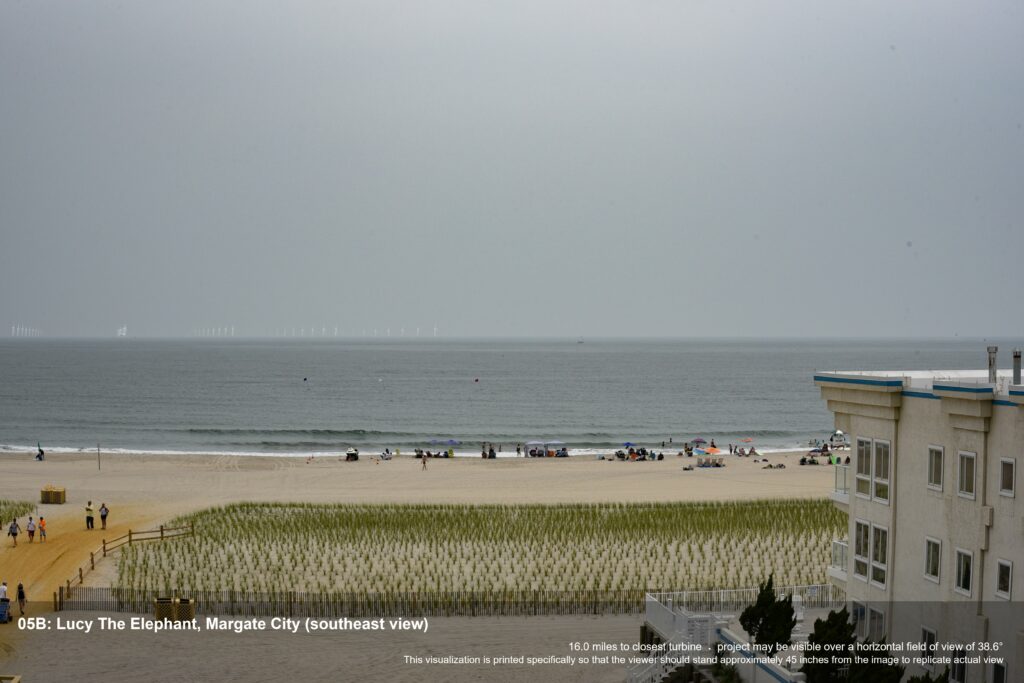 Orsted/Simulated view of the off-shore wind farm from the eyes of Lucy the Elephant in Margate.

The project, expected to be completed in 2024, is touted by Orsted, the company that wants to build the wind farm, as one that would supply clean renewable energy, power more than half a million New Jersey homes and create thousands of jobs.

The project, which would be constructed 15 miles off Atlantic City, has at least two years of permitting to go through before anything is a go – so it will be a while before 90 turbines take up residence in the Atlantic Ocean off the New Jersey coast, officials said.

The turbines would be spaced about a mile apart in rows and installed in deep water. The hub of the turbine would stand 511 feet tall, with blades increasing the height to a total of 905 feet, Orsted representatives said.

Kris Ohleth, senior stakeholder relations manager at Orsted, along with other company representatives, met with residents, city officials and others interested in learning about the wind farm during a two-hour town hall meeting held Saturday, Feb. 8 at the Ocean City Tabernacle. Orsted had renderings of the project in the Tabernacle lobby.

Scotch tape was put on the floor about 45 inches away from the renderings, replicating the view people would have of the turbines if they were actually standing on the shoreline looking out at the wind farm 15 miles away.

Unlike William Henry, who supports the project, there were some who were concerned about the wind farm.

Fear of the unknown and fear of the possibility that the wind farm could harm tourism in Ocean City, an area that heavily depends on it to thrive, gave some opponents and some skeptics of the project reasons to voice their concerns. 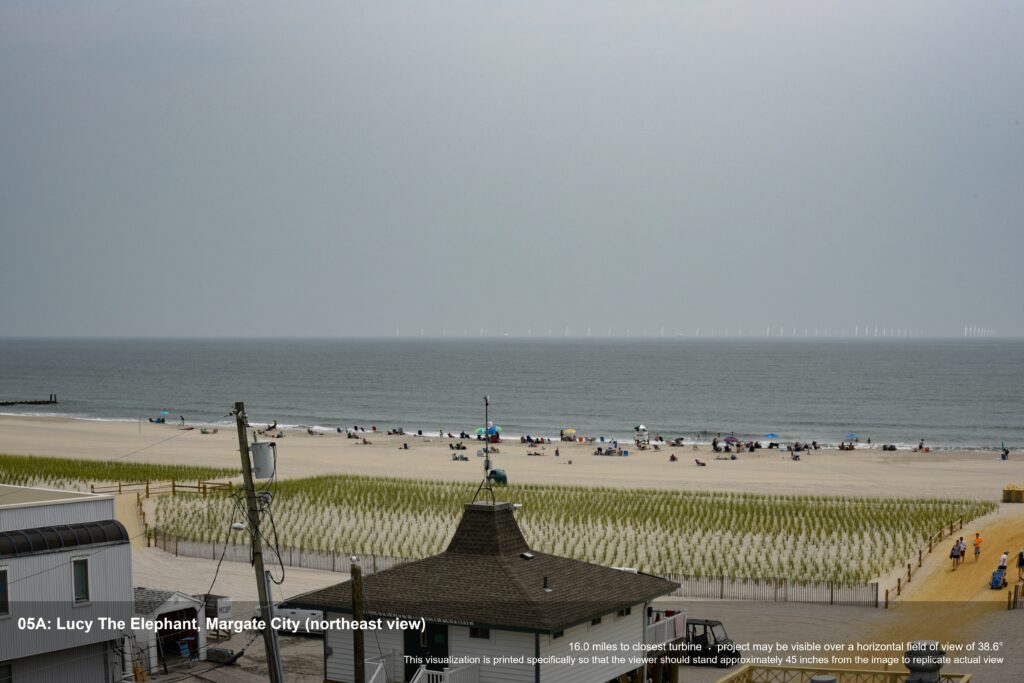 View from Lucy’s howdah in Margate.

The Oves family, who owns Oves Restaurant on the Boardwalk, has lived in the resort for generations.

Chris Oves and his father, Tom Oves Sr., attended the presentation  Saturday. Both had reservations about the wind farm.

“I am in support of it if they would put it out 25 miles or more,” Chris Oves said. “But that would cost a lot more money. Look, the mayor is for it, I’m for it if they take it out farther.”

Oves noted when speaking with an Orsted representative Vince Maione, that he had questions that needed to be answered.

“We need to study this,” he said, before walking away.

Oves, who is a high school science teacher, said he loves his community and just wants to ensure the seascape is not altered by turbines in the water. He is concerned it could affect tourism.

“There are too many questions that have yet to be answered,” Bradway said. “There needs to be a study about how it will affect the environment.”

Bradway said he questions whether the project is nothing more than a government-subsidized plan that ultimately would not be in the best interest of the residents or the environment. 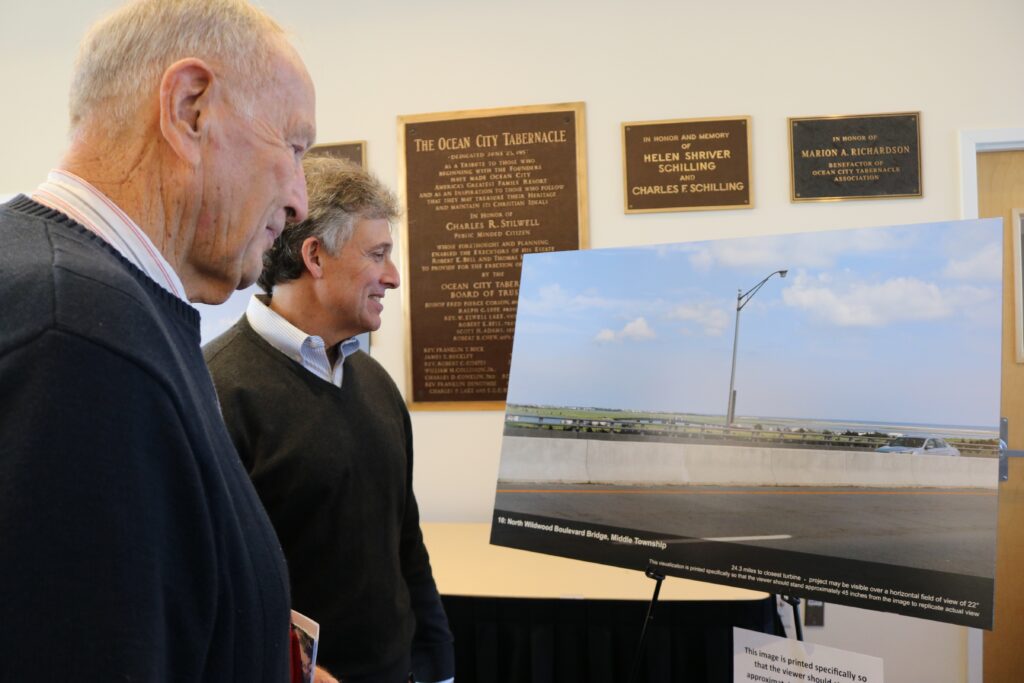 Some visuals on easels around the room depicted a person’s view from the shoreline in areas from Stone Harbor, the Wildwoods and up to Somers Point and Atlantic City.

It was the second such meeting the company has held in Ocean City, and followed a meeting held in Atlantic City earlier this week.

Members of the public spoke Saturday with Orsted officials and viewed maps, leaflets on the company, and asked an array of questions ranging from how the turbines could affect marine life to whether the wind farm could be heard on shore or seen. However, instead of a large meeting, it was clusters of people asking questions of Orsted officials at different tables.

Ohleth said before the meeting that she realizes some people will not be for wind farms.

Last week, Ohleth explained in an interview with Downbeach.com’s sister publication, OCNJDaily.com, that the view of the turbines would be minimal.

“You will be able to see them from shore, but they would be barely visible on only the clearest of days and about an eighth of an inch high off of the water – the horizon,” she said.

She also said the wind farm, which has a potential lease across a swath of space along the coast of Atlantic, Ocean and Cape May counties, would not be audible from shore.

Ohleth said she heard positive feedback from officials and members of the public during the meetings held in Ocean County and Atlantic City.

“It’s been very positive,” she said. “The reception has been that people are excited about the opportunity for clean energy, especially up in Ocean County.”

She noted that the turbines would not be seen from Ocean County, but cables would be routed through there.

Orsted is exploring three locations where underground cables could connect to the grid in the Ocean City area.

One includes the former B.L. England Generating Station in Beesley’s Point, where clean energy would replace what was once produced at the coal-burning plant.

If this location is chosen, underground cables would pass below Ocean City, Mayor Jay Gillian explained in a letter that went out to residents in November.

Orsted will return to Ocean City to host another town hall meeting, likely in the spring or early summer, officials said.

Gillian attended Saturday’s meeting, along with a host of other city officials and dignitaries.

The mayor did not wish to be quoted at the meeting, but said in his letter Nov. 15 to residents, “We are writing to tell you about an exciting new project that Orsted will bring to New Jersey. All of the energy produced by the Ocean Wind project will be delivered to the existing New Jersey electric grid, serving local homes and businesses.”

Ohleth said that if Orsted and city officials agree to run cables through Ocean City, improvements would be made to the local infrastructure.

“Depending on where we put the cables, there is a possibility of adding more pumping stations or raising the roads,” she noted. “We would work with the mayor and the city.” 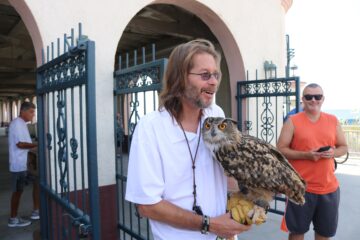 By MADDY VITALE OCEAN CITY – Those flocks of menacing seagulls that swoop down to steal French fries, pizza and ice cream from unsuspecting tourists will be in for a surprise this summer. Ocean City Read more…