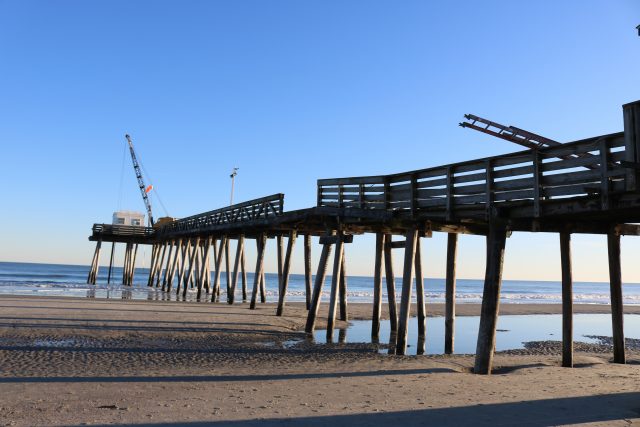 A view at low tide shows how much of the pier is surrounded by sand, not water, making it difficult to fish from it.

Extending an impressive 635 feet from the Boardwalk, over the beach and out into the ocean, the Ocean City Fishing Club pier is an enormous structure.

Now, what is already the longest manmade attraction in Ocean City is about to get even longer.

Work has started on a $500,000 project to extend the pier at 14th Street an additional 125 feet seaward, said Margaret Feil, secretary of the Ocean City Fishing Club.

Feil explained that the city’s beach replenishment projects have widened the shoreline so much that it is difficult to fish off the pier at low tide. Essentially there is sand now where there used to be water.

With the extension, the pier will be far enough out into the water to always drop a fishing line, even at low tide. When the project is completed, the pier will have a total length of 760 feet. 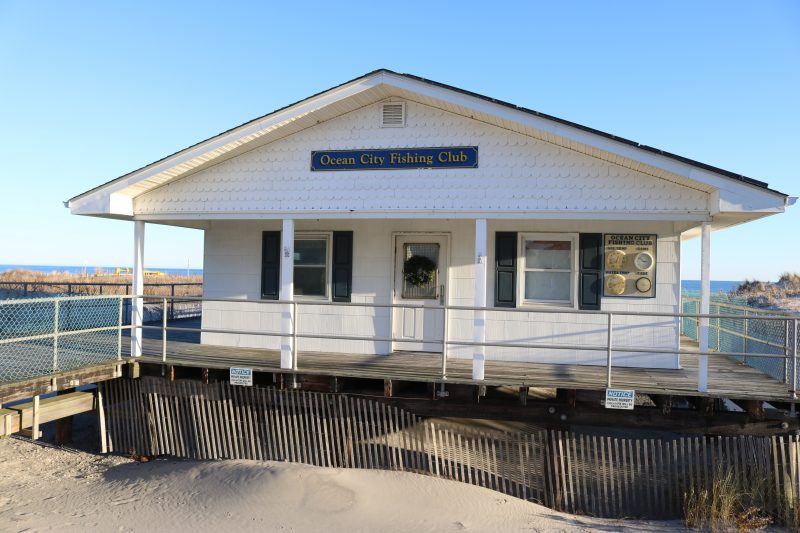 The Ocean City Fishing Club entrance is on the Boardwalk at 14th Street.

Giant, timber piles will be driven deep into the sand to serve as the underpinnings for the pier’s extension. A big crane sits on top of the ocean end of pier, signaling that work is underway.

To gain a greater sense and appreciation of just how immense the pier is, think of it in another way: Imagine it standing straight up, like a building.

At 760 feet high, it would make for an impressive skyscraper. It would even eclipse the 710-foot-high hotel tower of the Ocean Casino Resort, by far the tallest building in Atlantic City.

Over the years, the pier has been battered and severely damaged by hurricanes and nor’easters. The Halloween storm in October 1991 essentially cut off the ocean end of the structure.

“Because of the members’ enthusiasm for fishing, the pier was always rebuilt, improved, and/or extended,” the Ocean City Fishing Club says on its Facebook page. 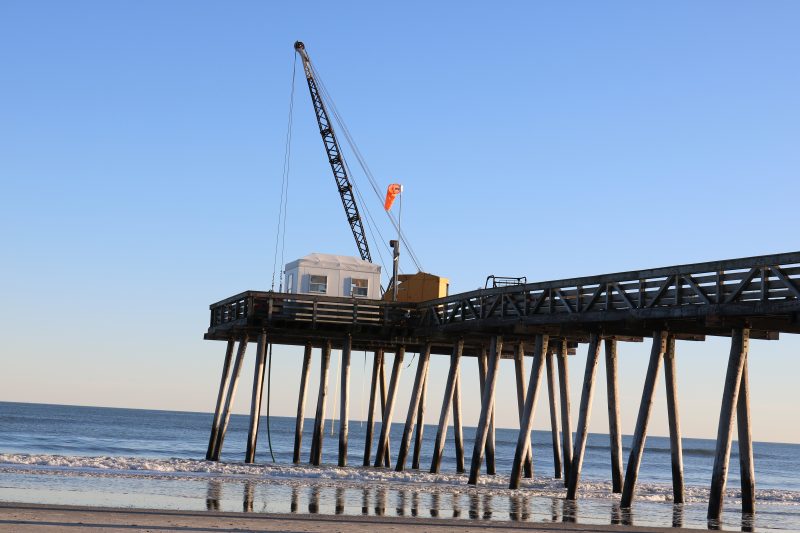 A large yellow construction crane sits on top of the end of the pier for the project.

Feil said the pier’s missing end was replaced after the 1991 storm. With the new 125-foot extension, the pier will grow to the longest it has ever been in its history, she noted.

Established in 1913, the Ocean City Fishing Club is famous for being the oldest continuously operating fishing club in the United States.

The private club has about 230 members. Donations and club funds will pay for the pier’s extension, Feil said.

Although the fishing club is private, it has held a series of open houses to invite in the public. The open houses are a good way for residents and visitors to learn more about the pier and the club, all while experiencing the stunning panoramic views of the ocean.

“When we have an open house, people are totally amazed when they get on it,” Feil said. “Once they are on it, they don’t want to get off.” 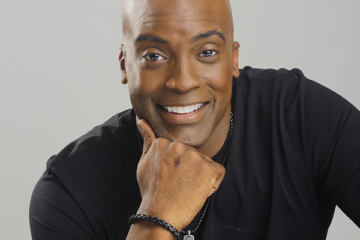