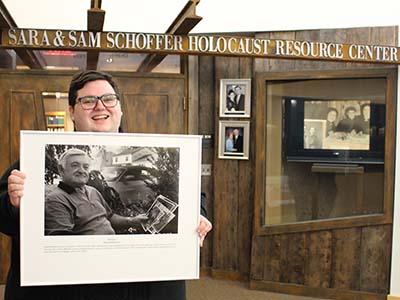 Provided/Stockton student George Quinn with photo of Holocaust survivor Donald Berkman of Margate, who established a pharmacy in Brigantine.

GALLOWAY TOWNSHIP – “Profiles of Local Holocaust Survivor Owned Businesses in South Jersey,” is an opportunity to learn about some of the contributions of the more than 1,400 Jewish Holocaust survivors who settled in the region after World War II.

The event will be held via Zoom at 7 p.m. April 19 and showcases part of a two-year research project coordinated by the Sara and Sam Schoffer Holocaust Resource Center at Stockton University.

Student George Quinn, who received a Stockton University Board of Trustee Fellowship for Distinguished Students, will show photographs and tell stories of some of the survivors and the businesses they owned. Quinn of Egg Harbor Township is a political science major at Stockton who has been accepted to a fully funded doctoral program at Rutgers University.

Hundreds of students, under the direction of Michael Hayse, associate professor of Historical Studies, have researched Holocaust survivors who came to Atlantic, Cape May, and Cumberland counties to start new lives. The students found these Jewish settlers established more than 300 poultry farms after the war ended in 1945. When farming declined, they remained in South Jersey and started other businesses.

Others associated with the project will join Quinn during the presentation.

Two Professional Development Hours are offered by the Sara and Sam Schoffer Holocaust Resource Center for educators who attend.