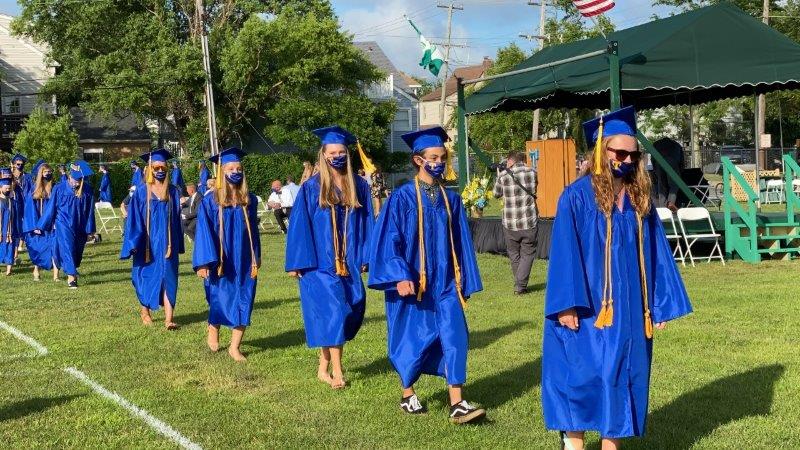 MARGATE – The Eugene A. Tighe School Class of 2020 is ready to face whatever the future holds. Amid the joys and difficulties of finishing their elementary and middle school years in Margate during the coronavirus pandemic, they have become resilient young adults and are ready for high school.

The school held a somewhat different graduation ceremony on the athletic field across Amherst Avenue. Past graduations have been held in the Dominick A. Potena Performing Arts Center, but this year, limitations imposed because of the COVID-19 pandemic rallied teaching staff and administrators to organize a shorter ceremony that was just as lovely as past indoor commencements.

Family members entered the field and sat in groups within socially distant boxes painted on the field. A video truck scrolled photos of the 37 graduates as babies and in their caps and gowns while a DJ played music appropriate for the occasion, including “God Bless America,” which was pre-recorded by students Sophie Goldstein, Liza Martino and Vincent Piraino. Two professional photographers took photos of the students receiving their diplomas. Each student wore a custom-made mask bearing the school logo.

Principal Ryan Gaskill, who served his first year as principal at the middle school level, started the ceremony by recognizing the students who received academic awards and awards presented by community organizations.

In person presentations were limited to those offered by Mayor Michael Becker and Commissioners John Amodeo and Maury Blumberg for service to the school beyond academics. They presented awards to Sophie Goldstein, Gracie Pierce and Vincent Piraino. Gaskill recognized other award winners and said they were honored during a virtual presentation held in June.

National Junior Honor Society President Aibhilin Scanlon gave the welcoming address, while Student Council President Patrick Grimley offered a speech only he could deliver, and Sophie Goldstein provided the keynote address. Each commencement speaker addressed how the students persevered through two major catastrophes during their school years – Hurricane Sandy and COVID-19. Despite those challenges and with the help of dedicated educators, the students continued to persevere, learn, and become active members of the community. That resilience will carry them through, they said.

Students lined up and as their names were called, they stepped onto the stage to receive their diplomas.

Before dismissing the graduates, Ryan announced that their parents have arranged to have a graduation dance at an outdoor venue in Atlantic City.