Lucy the Elephant gets a new address 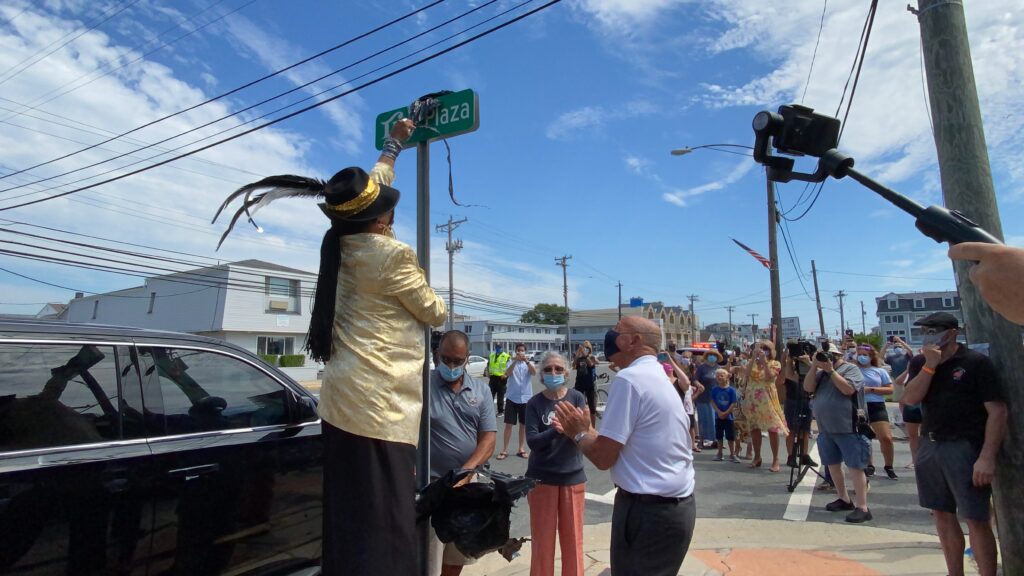 Local and state officials gathered Monday morning to unveil the new street sign at the corner of Atlantic and Decatur avenues that bears Lucy’s new address.

As special guests and speakers gathered on stage, volunteers and well-wishers sat under a tent to celebrate the city’s most famous resident’s 139th birthday and the renaming of the 100-block of Decatur Avenue in her honor.

The event also commemorated the 50th anniversary of Lucy’s 7-hour trek from her former location at Cedar Grove Avenue to Decatur Avenue. That move could not have happened were it not for a group of dedicated volunteers, including Margate residents Ed and Sylvia Carpenter, who friend-raised to help Lucy become the icon she is today.

The Save Lucy Committee purchased the dilapidated building from the Gertzen family for $1 and set about raising the money to fund her restoration.

“It took 30 years, $1.5 million and a lot of blood, sweat and tears from a small army of people to present what we have today, an internationally know National Historic Landmark,” Lucy Executive Director Richard Helfant said.

The Gertzens had purchased Lucy from land speculator James V. Lafferty Jr., who built the 65-foot-tall pachyderm as an attraction to bring investors to what was then South Atlantic City. They turned her into a tourist attraction and at one point, she was a four-bedroom residence. The residence remained inside Lucy until she was moved in 1970 to Josephine Harron Park.

“I don’t think any of them would have believed Lucy would have a street named in her honor,” Helfant said.

Save Lucy Committee President Davida Ross thanked the volunteers “who go above and beyond” to ensure Lucy maintains her watchful eye over beachgoers.

Mayor Michael Becker said the Board of Commissioners would add a plaque to the new street sign, recognizing her history.

“Lucy is a big attraction, not only for Margate, but worldwide,” he said.

He said visitors to the Atlantic City area do not recognize town boundaries on Absecon Island, and that Lucy is as much a part of the landscape of Atlantic City as it is in Margate.

Margate resident Jeff Vassar, executive director of the New Jersey Division of Travel and Tourism, who was 10 years old when Lucy made her historic move, represented the state during the event.

He said the division’s goal is to make the arts and cultural attractions as iconic as the Jersey Shore, “and very few things are as iconic as Lucy.”

He said the state would continue to support efforts that enhance Lucy’s “brand.”

Assemblyman Vince Mazzeo said that on his way into Margate, he recognized several centennial clocks.

“Not too many towns can boast a Lucy the Elephant, which has become synonymous with Margate. It is a great feat that all the volunteers through the years made such an effort to make sure Lucy the Elephant stays in Margate and remains such a tourist attraction,” he said presenting a proclamation from the NJ General Assembly.

He commended the volunteers, Save Lucy Committee and the city commissioners for “standing behind her” through the years.

“You need to be unified to do projects like this,” he said. 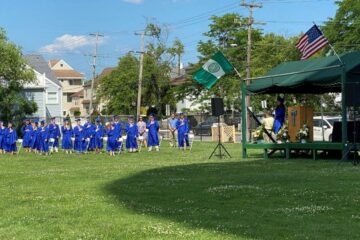 Tighe School graduates encouraged to ‘show up’ and ‘be authentic’

MARGATE – Under a bright blue sky on the athletic field at the Eugene A. Tighe Middle School Wednesday afternoon, 49 eighth graders switched their tassels signaling their promotion to their high school years. Principal Read more… 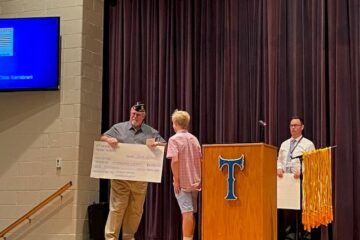