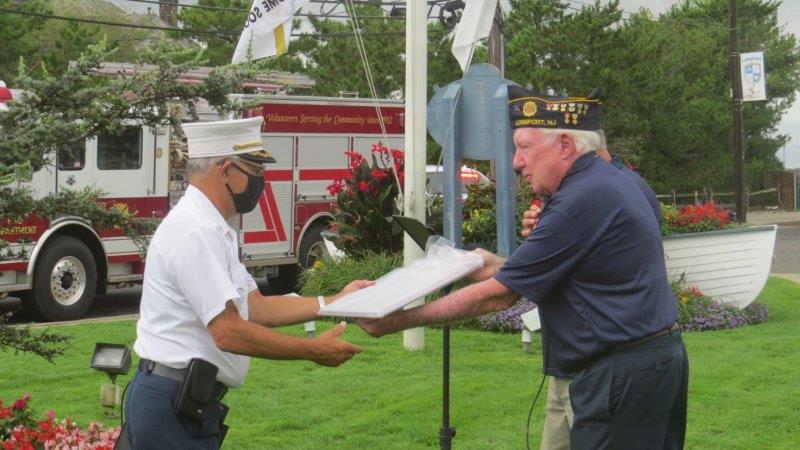 Downbeach communities vowed to never forget what happened in New York City, Washington, D.C., and Shanksville, Pa. on Sept. 11, 2001. Ventnor City first responders joined their counterparts in Atlantic City for the Saracini-O’Neill 9/11 service, while Longport and Margate held services in their communities.

Longport Mayor Nicholas Russo said the day not only honors the 2,977 victims who lost their lives in the World Trade Center, Pentagon and in a field in a rural Pennsylvania town, but also the heroic deeds of the first responders who rushed into the chaos to help save uncounted lives. They unified the nation in the aftermath of the attacks, he said.

He recalled divisive events throughout U.S. history, including the Civil War, that could have destroyed the nation, but when people came together in understanding, the government prevailed.

“Fanatic amoral terrorists tested the reserve of our government, but the government prevailed,” he said. 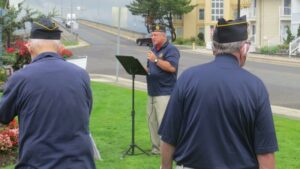 American Legion Post Commander Larry Pacentrilli said there are still those who seek to destroy America and relayed Abraham Lincoln’s 1858 quote from a Bible verse that “a house divided against itself cannot stand.”

Despite the horrific events of 9/11, the response from firefighters, police and emergency services workers, gave the nation hope, he said.

Due to the coronavirus pandemic, Margate’s annual service was moved to the Eugene A. Tighe Middle School to allow eighth grade students to participate. Fire Chief Dan Adams said it was important to educate the students, who were not yet born on Sept. 11, 2001, that they also should never forget the sacrifices made by first responders on a daily basis. Hopefully, they will pass that lesson onto the next generation, he said. 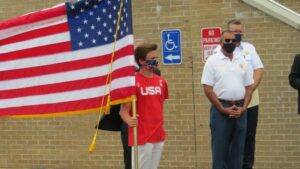 Students participated in the service by reciting the Pledge of Allegiance and reading the historical timeline of the events of that day.

Deputy Chief Pat Armstrong explained the ringing of the “four 5s” on the ladder truck bell, which honors fallen firefighters.

Former Fire Chief Anthony Tabasso said that 110 new names have been added to the 9/11 Memorial representing firefighters who have died over the last 19 years of lung diseases from breathing the contaminated air surrounding the collapsed twin towers.

Father Pawel of Holy Trinity Parish said it was not only fitting to offer a prayer for those who died, but also for the survivors whose lives have been changed forever.

“We can see how quickly a building can fall and lives end,” he said, praying that all Americans experience compassion, hope and peace.

Although Adams said he knew instantly that the World Trade Center was a terrorist attack, Superintendent of Schools Thomas Baruffi said he thought it was an accident.

“When the second plane hit, then we knew, and that it would change the world forever,” he said.

Since then, children learned a new vocabulary – words such as lockdown – and now they can include a new word – pandemic, he said.

“It’s so important for them to understand and appreciate first responders who work to keep everybody safe,” he said.

Commissioner Maury Blumberg said Friday was a good day to remember and never forget, set a personal goal to learn patience and tolerance, and a good day to eliminate hate.

Commissioner John Amodeo expressed unity and pledged to never forget the bravery and sacrifices made by first responders who gave the ultimate sacrifice to help their fellow Americans, and those who are risking their lives and health today to help Americans during the COVID-19 pandemic.

Adams closed the ceremony recalling how he, Armstrong and several Longport firefighters went to the World Trade Center to help save lives. 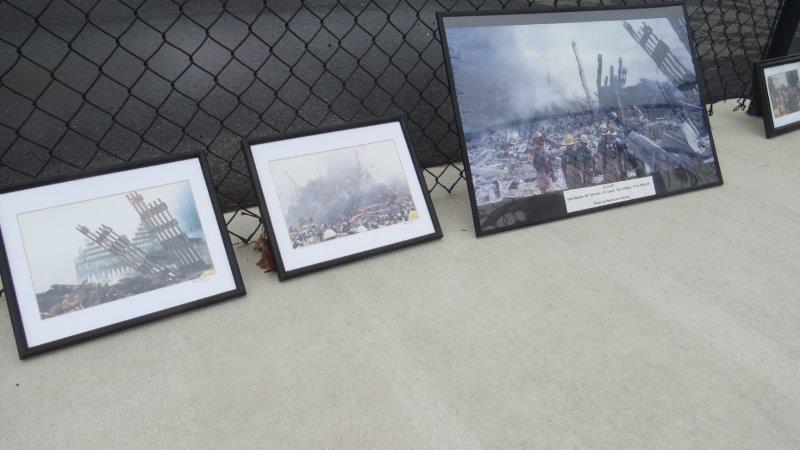 “We never saw anything like it before and hopefully we will never see it again. We worked the pile in silence, and left the scene in silence, drove home in silence. There were no lives left to save.”