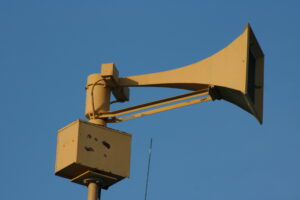 MARGATE – City officials have given their ok to accept a grant that would provide residents with an early warning system in the event of an emergency.

According to Construction Official Jim Galantino, the NJ Office of Emergency Management grant would provide the city with funding to install three poles that include sirens and voice speakers to warn residents an emergency is at hand.

The National Flood Insurance Program encourages communities to adopt and enforce regulations that help mitigate the effects of flooding. The Community Rating System provides 5% discounts on the cost of homeowners’ flood insurance policies in communities that implement policies, programs and services that increase resiliency against future storm events and strengthens the flood insurance program by reducing claims.

Flood insurance rates are discounted for activities such as public information, flood mapping and flood preparedness.

Margate’s current rating is Class 5, which provides all property owners with a 25% discount on the cost of flood insurance.

“We don’t get any credit for emergency (notification). We have to notify residents in the event of a catastrophe coming to Margate,” he said.

Galantino said the city tried to get credits for other types of notifications, such as reverse-911 calls, but FEMA, which oversees the flood insurance program, would not accept them.

“We had to go with a siren with a speaking device on top,” he said.

The $101,000 grant would cover the cost of erecting poles at the city’s two fire stations and at the Sigmund Rimm Recreational Complex, Galantino said. The grant requires a 25% cash match from the city.

The Board of Commissioners is scheduled to approve a national cooperative purchasing agreement with a firm in Texas, before procuring bids or quotes to purchase the equipment and do the installation.

Commissioner Maury Blumberg asked about any negative aspects of having such a system.

“For the people who live next to it, it’s going to be loud,” Administrator Richard Deaney said. “You’re going to have a voice coming out of the sky.”

Chances are the system will never have to be used, but it will be tested several times a year to ensure it is operational.

“When the end is coming, people want to know,” Blumberg said.

Galantino said Emergency Management Coordinator Chuck LaBarre would have control over semi-annual testing and any emergency notifications that may become necessary.

“I think it’s going to be a home run for Margate. It moves us forward to the 21st century with notification to people on the beach or at home,” Galantino said.