Published by Nanette LoBiondo Galloway on May 27, 2021 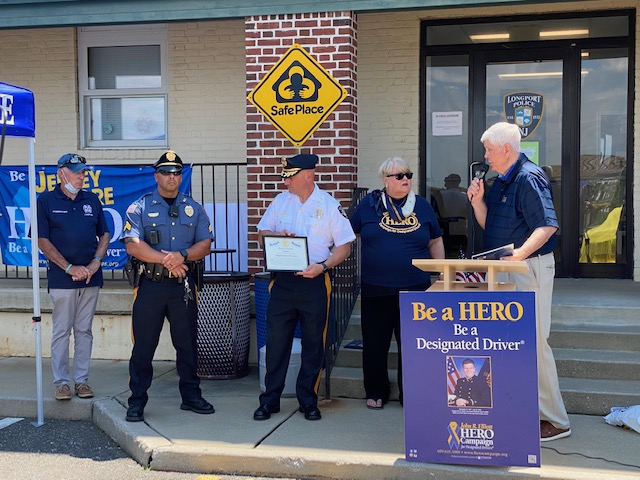 LONGPORT – Police from three South Jersey police departments, along with federal, state and county officials, joined Bill and Muriel Elliott in the park behind Longport Borough Hall Thursday afternoon to open the “Summer of HEROES” campaign by unveiling three police vehicles that carry the HERO Campaign’s message: “Be a HERO. Be a Designated Driver.”

The Longport Police Department unveiled its recently painted and detailed Humvee, which carries a seal dedicated to longtime Longport resident and philanthropist James Klinghoffer, who died last week. Klinghoffer contributed the funds necessary to get the Army surplus vehicle painted dark blue and detailed with the HERO Campaign logo and messages to prevent unnecessary tragedies.

“We are not anti-drinking,” Bill Elliott said, “we are pro-safety.”

Memorial Day weekend marks the unofficial start of summer when locals and visitors look forward to getting out and enjoying all the Jersey shore has to offer.

“Especially after this year, people want to get out a bit, go to the beach and enjoy themselves,” Bill Elliott said. “We want to make sure if they have the temptation to indulge, they also have a safe ride home.”

The Humvee was one of three vehicles wrapped with the HERO Campaign’s life-saving message to appoint a designated driver. Dr. Bob Zlotnick of Atlantic Prevention Resources, which works to prevent the abuse of alcohol, tobacco and other drugs, was on hand to unveil Pleasantville’s HERO Campaign police cruiser, which will be used for high-profile patrols.

“This vehicle was previously wrapped for breast cancer awareness, but it was peeling off,” Zlotnick said. “When Bill Elliott called us three or four months ago asking for a connection to the Pleasantville Police Department, we jumped at the opportunity to raise funds from several Pleasantville businesses to get the department’s vehicle customized with the HERO Campaign’s message.”

The Vineland Police Department also unveiled its cruiser, which was dedicated to the memory of Sgt. Baron McCoy, who died in 2015, and Mark R. McGinly, who died at the World Trade Center on 9/11.

According to Longport Police Sgt. Ray Burgan, who did much of the legwork getting the Humvee ready for the “Summer of Heroes” initiative, said Klinghoffer, who was a great supporter of the department, provided the funding to get the vehicle in shape. Additional equipment will be added to the Humvee, which will be a unit in Longport’s Memorial Day Parade at 11 a.m. on Monday, May 31.

“This Humvee is the pièce de resistance for the HERO Campaign’s fleet of police vehicles,” Elliott said. “It’s like a moving billboard, so there is no better way to get the message out than a police vehicle roaming the streets and stopping at schools. The exposure and interest is very high.”

Other municipalities that have HERO police vehicles are Ocean City, Linwood, Atlantic City, Middle Township, Evesham Township, Sea Isle City, and now Longport, Pleasantville and Vineland. The idea was formed when then-Ocean City Police Chief Simonson contacted Elliot with the idea of how to make a life-saving statement about avoiding drunk driving accidents.

“The attention it receives will remind everyone of the tragedies that can occur,” he said.

Longport Police Chief Frank Culmone said the department, which has a reputation for being tough on impaired driving, is proud to have the first military vehicle in the HERO’s fleet. He said the vehicle will be highly visible around the borough, at area schools and special events.

The HERO Campaign started 20 years ago, following the death of the Elliotts’ son, Navy Ensign John R. Elliot who was killed in a collision with a drunk driver in July 2000, just two months after he graduated the U.S. Naval Academy, where he was named Outstanding HERO of his graduating class.

Other dignitaries who attended the unveiling included U.S. Assemblyman Jeff Van Drew, who presented a Congressional citation to the Elliotts, and NJ Assemblyman Vincent Mazzeo, who credited the Elliotts for creating a campaign that has become nationally recognized. The HERO Campaign has been adopted in Pennsylvania, Delaware, Virginia, Massachusetts, Kentucky and Maryland, as well as in New Jersey.

“My son is now 26 and there were several phone calls from him on Sunday mornings after a night of drinking to come get him so he can go back and pick up his car. The HERO campaign did that,” Mazzeo said.