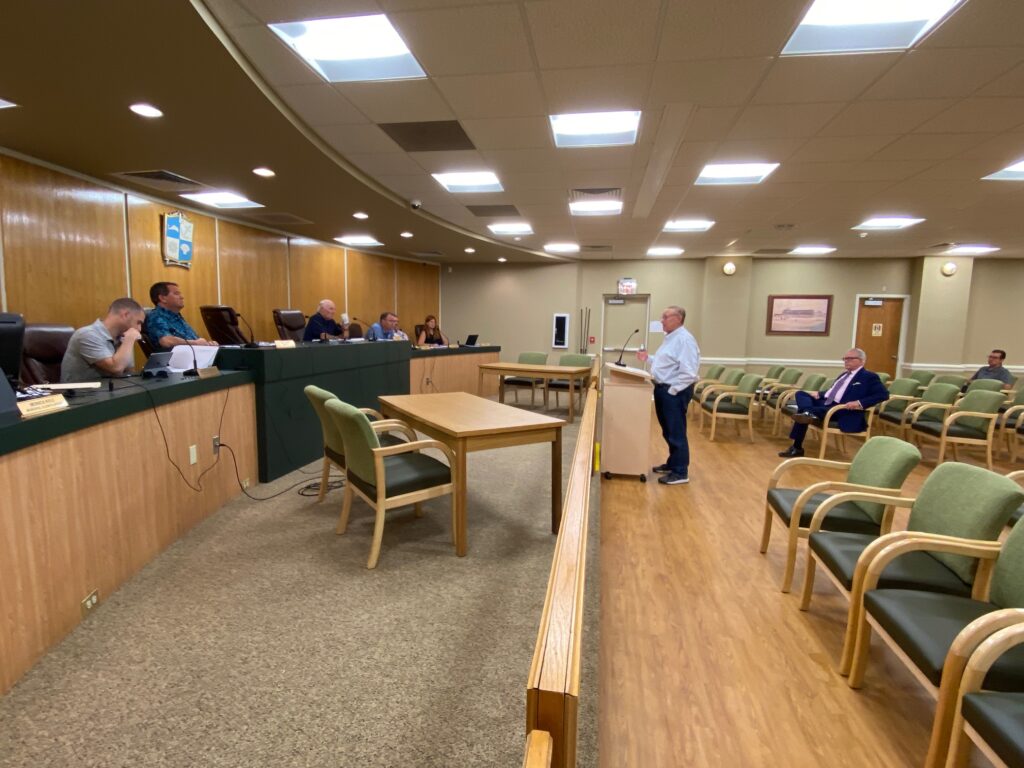 LONGPORT – County representatives made a presentation before the Board of Commissioners, Wednesday, Sept. 22 touting the benefits of Longport joining the proposed countywide consolidated court system on tap to begin Jan. 1, 2022. To date, eight Atlantic County municipalities, including Ventnor City, have expressed interest in joining the consolidated court system, which is designed to reduce costs for municipalities.

According to Atlantic County Solicitor Jim Ferguson, an analysis of the average annual cost during the three pre-pandemic years shows that Longport could save as much as $210,000 on the cost of running its courts. The borough hears about 1,024 cases per year and has one of the highest costs per case in the county, he said.

On May 1, Longport approved a 5-year agreement to consolidate its court with neighboring Margate at a cost savings and currently pays Margate $10,000 per month, in addition to covering the $33,163 annual cost of the prosecutor, public defender and judge.

Ferguson said a proforma analysis with a 10-member model showed that if Longport and Margate join the county court, Longport would pay an estimated $31,700, depending on how many other towns agree to come on board.

Ferguson said Longport’s court generated an estimated $44,700 in revenue, which would turn into a “substantial surplus” if Longport joined the county system. It would also be able to eliminate the cost of providing police security for the court.

Ferguson and retired Superior Court Judge Mark Sandson said about 85% of cases would be heard remotely, while more serious charges, such as driving under the influence or any crime that would require jail time upon conviction, would be heard in the old Criminal Courthouse on Main Street in Mays Landing.

“Your police officers and building inspectors would likely give testimony virtually,” he said.

Those charged could attend court virtually from home or log on at a computer kiosk provided by the county and set up at Borough Hall or the Longport Public Library, Sandson said.

A governance committee would meet annually to review operations and set the budget, passing recommendations on to Atlantic County Executive Dennis Levinson for inclusion in the county budget. A personnel committee would conduct interviews of judges and other court officials.

Hearing domestic violence, mental health and drug and alcohol cases in one central location would allow the county to provide diversional resources currently not available on the local level, said Sandson, who before retirement ran the county’s drug court.

“It’s a better court because we will be able to do something about the three biggest reasons people come to court in the first place,” he said. “It’s an exciting proposal.”

Commissioner Jim Leeds agreed having social service support for those charged would be a good thing.

The county is currently refurbishing three courtrooms and judges’ chambers, and administrative offices in the old Criminal Courthouse in Mays Landing and is conducting interviews for judges. Superior Court Administrative Law Judge Julio Mendez would select the judges that hear cases from the eight or 10 member municipalities, which include the county’s largest communities – Egg Harbor, Galloway and Hamilton townships. The judges must ultimately be appointed by the governor.

“It’s a win-win and we think it will save you money, and we hope you will seriously consider it for the benefit of your citizens,” Ferguson said. “We know there is resistance to change…but this is an opportunity to really save the taxpayers money. It is an idea whose time has come.”

Atlantic County is currently the only county in the state considering forming a consolidated court system.

“The savings to municipalities if really pretty staggering,” Sandson said of the investigation prepared by the Atlantic and Cape May County Vicinage. “It is not a hot button issue and makes sense.”

Overall, Atlantic County municipalities that join could save as much as $1.7 million, a 50% savings on the current cost of running the courts, he said.

Commitments to the county system will be for a minimum of two years, but after that period, towns can withdraw with 6-month’s-notice, although the municipality would be required to pay their annual assessment.

Longport Solicitor Michael Affanato said the borough is committed to Margate for the next calendar year and would have to give Margate 6-month’s-notice of its intention to leave by July 2022. It would not be able to join the county system until January 2023.

“We would be remiss not to seriously consider this because of the tax savings to the public,” Commissioner of Public Safety Dan Lawler said.

“There’s a lot of information to consider,” Leeds said.

Mayor Nicholas Russo was absent from the meeting.