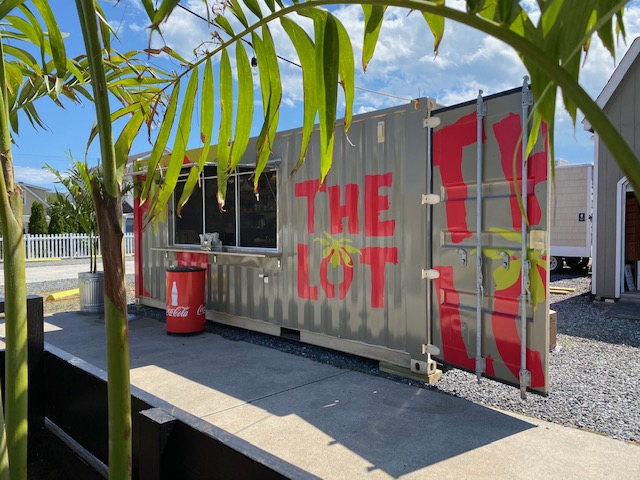 The Lot opened at Tomatoe’s on Monday for outdoor dining.

MARGATE – After making a sizeable investment in customizing a brand new bar trailer and a food truck, Tomatoe’s owner Karen Sherman is hoping the city will allow outdoor dining after the COVID-19 pandemic fizzles.

The City of Margate allowed local restaurants to use their parking areas, or in the instance of Bocca Coal Fired Bistro, a portion of the street, for outdoor dining until Dec. 31.

“We are hoping they will see the positive response from the community and will allow us to continue serving outdoors next summer,” she said.

Sherman and her husband Carmen Rone created an outdoor dining space on their stone covered parking lot across Massey Avenue near the kitchen access area at the back of the popular bayfront restaurant. The restaurant maintained its 40-space paved lot that goes street-to-street from Washington to Adams Avenue.

Although they have invested a considerable sum to ensure their patrons have a place to park, Sherman said Uber has “changed the world.”

“People know now not to drink and drive and many are using ride-share services,” she said.

Tomatoe’s, which is located at 9300 Amherst Ave., even has a 12-seat passenger van to pick up and drop off diners who have reservations.

They are calling the dining area “The Lot,” and the name is painted on the side of the service bar trailer, which is really a shipping container customized by a company in Hammonton. Tables with umbrellas are scattered throughout the space, along with Adirondack seating areas, while Reggae music gently emanates across the dining area.

“We don’t want to offend the neighbors but want to provide a ‘chill’ atmosphere that reflects summer at the beach,” she said. 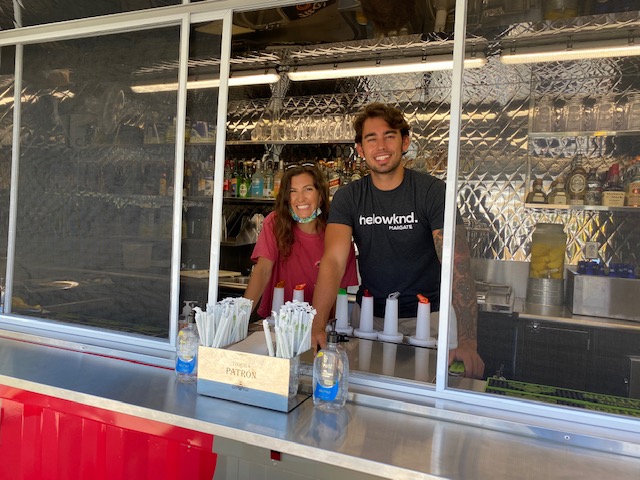 The Lot bartenders Laruen Genova and Cameron Rone are ready to serve up tropical drinks and more.

Bartenders at The Lot, Lauren Genova and Sherman’s son Cameron Rone said there’s more room behind the trailer bar than in the restaurant. 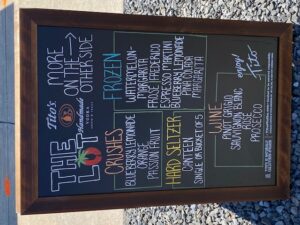 Sherman said the food served in the outdoor space is limited but “reflective of what we serve inside,” and that the restaurant is continuing with its take-out menu.

The entrance to The Lot is on Washington Avenue where a host greets guests, but no reservations are being taken.

“We are first-come, first-served, but we expect to have a wait-list,” she said.

The Lot opened on Monday and will provide dinner offerings from 4-10 p.m. The city has mandated that all outdoor venues close by 10 p.m.

The Lot’s “spiffy” new food truck will arrive on Thursday after being customized by the Hammonton company, one of the only companies in the country to outfit service vehicles.

The food truck will have the customary fryer and flat-top grill, but also includes a rice cooker, she said.

This year is the restaurant’s 21st year in operation. Before it moved to the Amherst Avenue location, it called Ventnor Avenue home for six years. Prior to that, Rone operated Carmen’s Italian Restaurant in Ventnor at the current location of Yama Sushi. The couple also owns “Done” on Ventnor Avenue in Margate where patrons can pick up pre-cooked take-out meals.

“That has been a godsend. It has great food, all just ready to go. It’s perfect for when you don’t feel like cooking,” she said.

All told, the family has been in the restaurant business for more than 38 years and survived Hurricane Sandy which brought 4 feet of saltwater into the restaurant.

“I don’t know how many more disasters I can survive,” Sherman said. 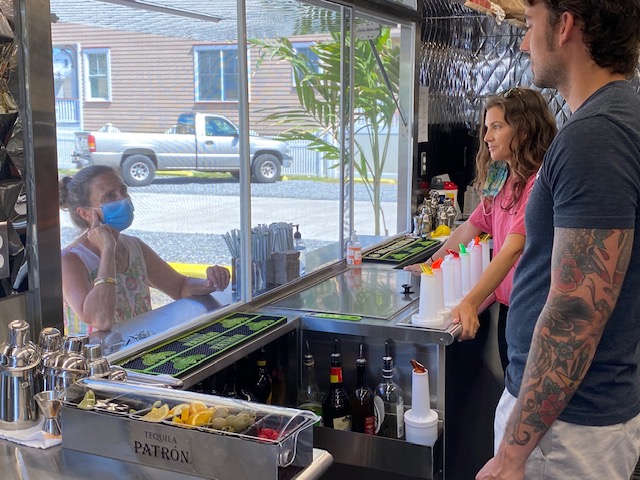 When she heard Monday of Gov. Phil Murphy’s “no go” order on allowing indoor dining at 25% capacity, Sherman, like restaurant owners across the state, was totally devastated.

“He saw a photo of a bar somewhere else in New Jersey that was overcrowded and people not following social distancing guidelines, and now we are all being punished,” she said.

Following reports of the resurgence of the uncontrolled coronavirus in many parts of the country, Murphy’s Executive Order No. 158, temporarily pauses the resumption of indoor dining, which had been scheduled to resume July 2.

“Unfortunately, the spike in cases in numerous other states, compounded by instances of non-compliance in New Jersey, require us to hit pause on the restart of indoor dining indefinitely,” Murphy said. “I recognize that there are many establishments whose owners, managers, and customers have been responsible, but we cannot move forward unless there is complete compliance. Throughout every step of our restart, we have been clear that we would not hesitate to hit pause to safeguard public health, and this is one of those times.”

The NJ Business Coalition, which includes the Greater Atlantic City Chamber of Commerce, released a statement Tuesday asking the governor to reimburse restaurants and casinos for the investments they made to purchase food in preparation for service this week.

“We should recognize they invested in interior changes to their facilities, notified staff they can come back to work and spent considerable dollars to purchase food and beverages in order to meet the demands of the customers they were ready to serve,” the statement said.

Businesses are facing “insurmountable” odds of surviving while operating safely, and more than 20% of restaurants have already closed their doors and will not reopen. The coalition asked the governor to allow those following COVID-19 protocols to reopen and tackle “bad actors” through enforcement. 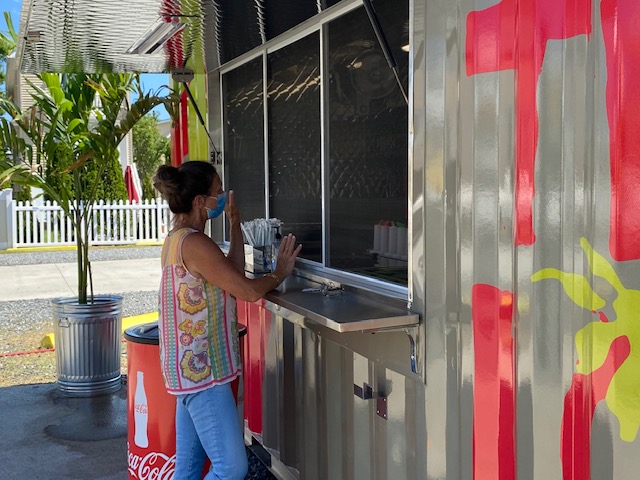 Karen Sherman speaks with bartenders at The Lot.

Although Sherman said Tomatoe’s is in no danger of closing, the restaurant is only doing about 20% of its normal business, and only 15 of the 100 people she employs are back to work.

“It’s mostly back of the house employees, and a few wait staff. My employees love their jobs and want to be here. We had everyone lined up to come back and then had to tell them no,” she said. “We understand his concerns, but he should not punish the ones who are following the guidelines. Nevertheless, we will tow the line.”

On the first night of outdoor service, diners were content to sit back and relax. All wore masks at the appropriate time and they had people waiting patiently for a seat.

It was nice to see many of her steady customers again, she said.

“People like the vibe at Tomatoe’s. It’s an upbeat place with a large bar and we are hoping to carry that impression to our outdoor space,” she said. “All we ask is for people to remain nice. We are doing the best we can.” 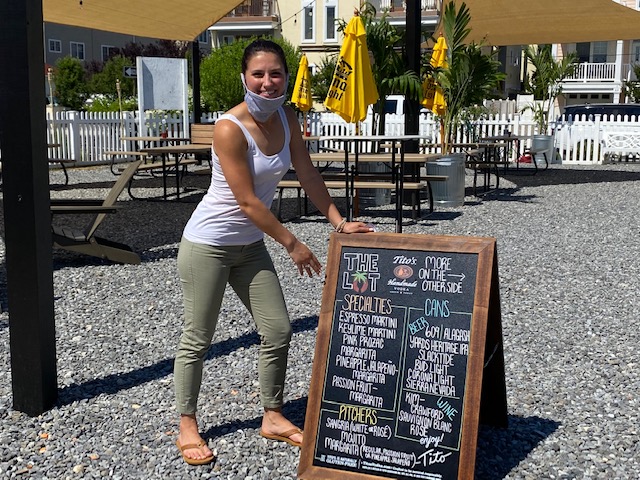 Manager Theresa Novelli presents the menu at The Lot next to Tomatoe’s Restaurant in Margate.

Manager Theresa Novelli said she is sure the effort the owners put out will be appreciated by their customers.

“They had a vision and put a lot of thought and effort into making lemonade out of lemons,” she said. “Tomatoe’s is a great place. It’s definitely where you want to dine when you come to Margate.” 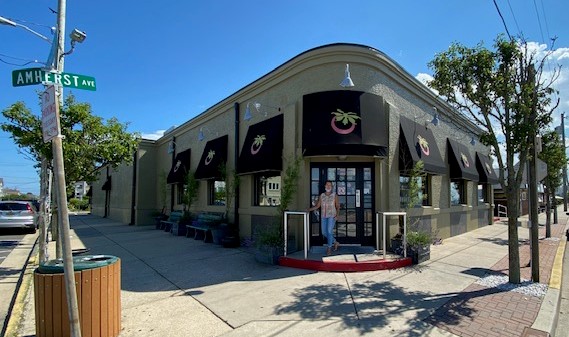 Tomatoe’s Restaurant is located at the corner of Amherst and Washington avenues in Margate.